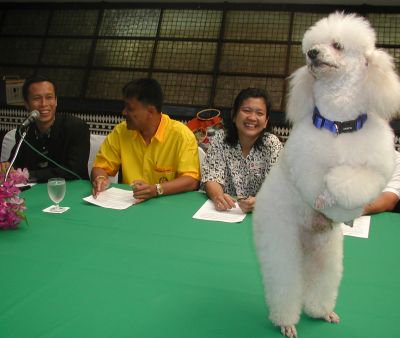 PHUKET: The Rotary Club of Phuket has teamed up with the Raksatt Small Animal Hospital & Pet Shop and the Chaipak Dog Training Center to form a group to help both pets and people suffering from post-tsunami stress.

The coordinator of the Helping Tsunami Victims Through Dogs project, Anupan Boonchuen, noted that dogs can help relieve the suffering of tsunami victims by providing companionship, thereby making them feel less stressed.

He said the group also plans to promote adoption of dogs and will put up a list of available animals on its Thai-language website soon.

Wanchai Jiampakdee, owner of Chaipak Dog Training Center, warned that some dogs are themselves still suffering from post-tsunami stress and, as a result, may exhibit strange behavior, such as acting aggressively toward people.

He encouraged owners of dogs still suffering stress to treat their pets kindly and take them for walks in public to help them to gradually refamiliarize themselves with their surroundings and regain self-confidence.

The group also plans a “dog caravan” show to tour local schools and other community groups, with the goal of putting a smile back on the faces of people who have themselves suffered from the disaster.

The project will run for one year, with dog caravan performances in February and April.

The group has also helped some 60 dogs suffering from post-tsunami trauma and neglect. It moved 46 animals from Wat Yan Yao, where thousands of human corpses are being kept, to a shelter in Takua Pa Municipality. It is also looking after 14 more dogs currently in detention at the controversial Mid Road Dog Shelter in Thalang.