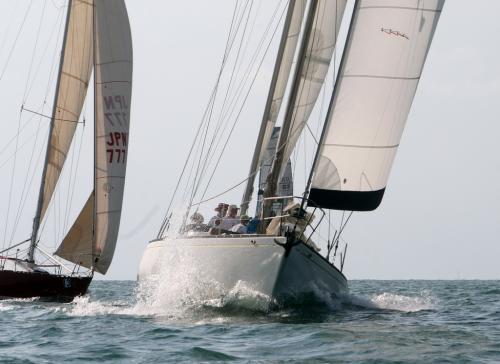 The 16th annual Bay Regatta kicked off Wednesday night in style with a finger buffet at the Ao Po Grand Marina. After leading a skipper’s meeting, PRO Simon James took to the stage to welcome everyone, laying out the ground rules and warning people of the Bay’s all pervasive fishing nets.

The idea for this regatta is to sail deep into Phang Nga Bay, but not too deep as past regattas have been struck with some beautiful karst topography at the top of the Bay, but little or no wind.

To the delight of his fellow competitors, Niels Degenkolw’s Phoenix is competing in the five-boat Racing Class this year. Niels has seven previous Bay Regatta victories in Cruising Class A, where some considered he had an unfair weight advantage. He’s up against Peter Jones’ refurbished Moya Hin, Ray Waldron’s Phuket 8 Surf Patrol, Andrew Marshall’s Mumm 30, Judy and Arbuzov Andry’s Young 11 and Ruby Tuesday. It was the last mentioned that won the day jumping out to a quick lead and not relinquishing it, eventually winning by two-and-a-half minutes on corrected time over Moya Hin, with Phoenix coming in third.

The 5-woman Lady Sevenstar team (racing what was formerly The Frog) is one of 11 entries in the multihull division with Aussie helmswomen Liz Schoch leading her multinational crew of Marieke Derks, Meike Lange, Maureen Ezendam and Lies Sol into action. They even have an individual support boat following them throughout the event.
In that multiclass, Mojo, a Schionning G Force 15, won by 1:07 on corrected time over Fantasia, (a Stransky 15), with David Liddell’s Miss Saigon, a Corsair 37, coming in third.

Coming into this regatta, Mojo had won the Raja Muda, the King’s Cup and the Royal Langkawi International Regatta, so it certainly had a hot hand and was continually upsetting Fantasia, who was the cat’s meow the year before. Ironically, it was Mojo skipper Peter Wilcox quizzing Fantasia skipper Andrew Stransky that brought Mojo to Southeast Asian waters.

The three Fireflies in the Regatta (Lady Sevenstar, Voodoo, and Twin Sharks) finished out of the top three spots yesterday, but Voodoo had the best time of the three, winning the bottle of champagne supplied by the committee to the fastest Firefly.

The Bareboat Charter class saw Nikiforv Everil’s Kinnon, a last-minute entry, take home first by nine minutes over fellow Russian Igor Skvortsov, helming Uhuru, a Bavaria 46 Cruiser. Third place went to PIMEX Lawan, a Sun Odyssey 409. And yes, by the way, that was sponsorship guru Paul Poole you saw crewing for Andy Dowden, on PIMEX Lawan. Paul is rumored to be thinking of joining the Round the World Clipper Race.

Although one boat did not start (Richard Eyre’s Zhuka with sail-fitting problems), yesterday’s race was thought to be the first time in Bay Regatta history that all boats starting, finished.

The Bay Regatta is proudly sponsored by the Phuket Gazette, PGTV and the nationally televised Phuket Today show, now aired eight times a week on UBC/True Visions (channels 99 and 58).

German tourist dies after fall on rocks at Khao Lak