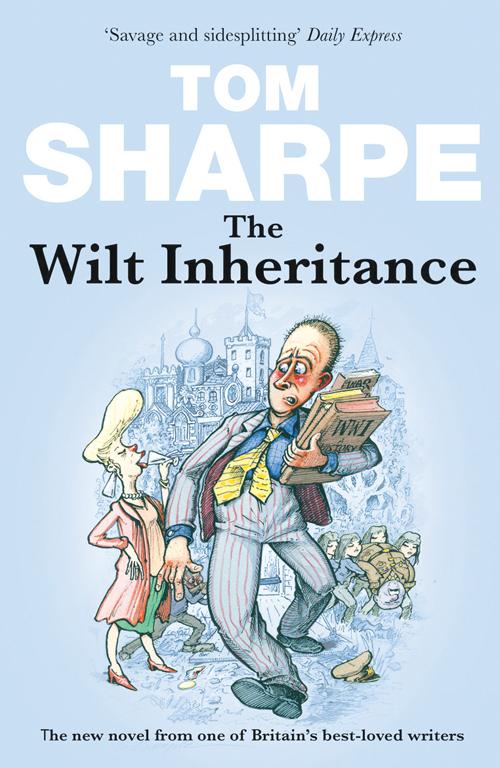 PHUKET: Tom Sharpe can be described as the heir of PG Wodehouse, the master of English farce. His first satirical novels, Riotous Assembly and Indecent Exposure, were written about South Africa to where he had moved, after attending Cambridge University, to work as a teacher and social worker in 1951. A decade later, he was deported for “sedition”.

In 1976, he scored his biggest success with Wilt, a hilarious novel about Henry Wilt, a cynical drunken lecturer at a mediocre English university. The highlight, and the cover cartoon, has a frantic Wilt stuffing an inflatable sex doll down a piling hole. Why? Don’t ask.

Wilt inspired four sequels, the latest of which is The Wilt Inheritance (Arrow Books, London, 2011, 328pp). Despite the 35 years that have passed since the first novel, Wilt is still middle-aged, still dissatisfied with his dead end job as a mediocre university professor, still saddled with Eva, his hare-brained and bossy wife, and afflicted with four teenage daughters – Josephine, Emmeline, Samantha and Penelope – the “quads” or quadruplets.

“Wilt’s spirits sank even lower when he thought of his daughters, all four of them exact replicas of his ghastly wife and just as loud and overbearing as she was. No, more loud and overbearing than she was, given the combined effect of their quadruple efforts. All four girls were inexhaustible in their petty squabbles and inter-sororial battles, and he was pretty sure that the demise of his get-up-and-go had pretty much coincided with their arrival.”

“Ghastly” is the most overworked adjective in this book. Everyone is ghastly. Eva befriends the ghastly Lady Clarissa, a drunk and a nymphomaniac, who is married to the ghastly Sir George Gadsley, a gun nut and philanderer after fat ladies. Lady Clarissa persuades Eva to move her family to her country estate for the summer, so that Henry can tutor her son, the ghastly Eddie, so he can pass his exams to get into Cambridge. Eddie shows no interest in anything except for throwing stones at trespassers on the estate.

“Nothing, be it animal or small child, was entirely safe when Eddie was around,” Lady Clarissa reflects. “There had been a couple of unfortunate run ins with some of the townsfolk, who seemed not to accept the argument that if their children would trespass on the estate then they only had themselves to blame. A lot of silly fuss about nothing really. After all, what were a few stitches here and there? And it wasn’t as if the child was good-looking in the first place.”

Now, however, Eddie has graduated from stones to Sir George’s high-powered hunting rifles. The problem is that the author hasn’t bothered to develop the character of Eddie at all. We don’t even know what he looks like.

In fact, Tom Sharpe is 84 and showing his age. Many of his jokes are lame and the plot wanders about witlessly. An aged uncle of Lady Clarissa has died of drink. The quads hid his body. Eddie discovers them and manages to shoot himself to death. The quads hide his body. The police search the estate with sniffer dogs who seem overly fond of the quads. But they get off scot-free and return to their posh boarding school to wreak more havoc.

There are a host of stock characters: the retired army colonel, the bumbling police inspector, the petty village vicar. The vicar hates Sir George for spreading the rumor that he was “a pervert who interferes with small boys”. The inspector thinks this over and asks: “And are you?”

“How dare you! Of course I’m not. You can ask my wife, if you don’t believe me. I don’t even like small boys . . . nasty, vicious little things. Or big boys, come to that.”

The whole novel is covered with this sort of fustian air. The country has moved on but this sort of genteel comedy has not. Perhaps satire is a game for young men who are angry enough to sustain it. The octogenarian Tom Sharpe is just telephoning his satire in.

“The Wilt Inheritance” by Tom Sharpe is available for download for the kindle from Amazon (click here), or by order through the main bookshops in Phuket.