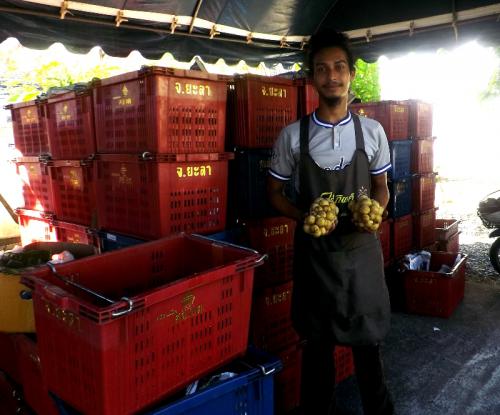 PHUKET: The island’s supply of langsat (Lansium domesticum) has increased by 10 tonnes over the past few weeks due to a late-season harvest surplus in and near Thailand’s Deep South.

Since about mid-January, several agriculture groups from Yala, Songkhla and Phatthalung have travelled to Phuket to sell the fruit wholesale, with the Phuket Office of Commercial Affairs (POCA) serving as their central distribution point.

POCA Director Prakong Rukwong told the Phuket Gazette that his office had permitted the merchants to temporarily set up shop on its yard – just across the street from the Seng Ho book store in Phuket Town (map here) – as part of a collaboration with the respective Commercial Affairs offices in the three provinces.

“Due to the surplus, markets throughout the Southern provinces have become flooded with langsat. Therefore, some agricultural groups and co-operatives have asked for our co-operation in helping them distribute the fruit in Phuket,” Director Prakong explained.

Mr Prakong said that Phuket was considered an ideal place for two main reasons: the province’s relatively higher spending power, and the fact that langsat is not grown in Phuket.

He added that the POCA would only be allowing the distributors to use its yard on a temporary basis, and that their stay wouldn’t extend beyond the end of February.

“We realize that there are some merchants in Phuket who make a living by importing fruits, including langsat, from other regions, and we don’t want to make a problem for them.

“Another reason why we’re supporting them [langsat distributors from Yala, Songkhla and Phatthalung] is because they’ve had trouble distributing [at their respective locales].
“Merchants are increasingly hesitant to travel to the South due to the unrest down there.”

Mr Prakong revealed that most of the current langsat batch came from fruit sorting centers in Yala’s Ban Nung Sata and Songkhla’s Saba Yoi districts, with about three to four different groups rotating in and out so far.

He pointed out that langsat from Yala are particularly popular throughout the country, known for their sweet taste, and thus call for a slightly higher price than other varieties in the market.

Altogether, he estimated that the surplus being distributed in Phuket is about 10 tonnes (10,000 kilograms).

Speaking to the Gazette at the POCA, a merchant from Yala who called himself “Ying Ming”, said that he had traveled to Phuket earlier this week with a group of six.

He revealed that his group had spent about 8,500 baht for the trip and that they were hoping to break even.

“Our daily expenses, including food and lodging, are about 1,000 baht per day… We would prefer to sell at a fresh market, as there’s not so much [pedestrian] traffic here. However, we’ve only been permitted to sell here for now,” he explained, adding that bulk purchases can receive considerable discounts.

The langsat bunches are divided into three grades – A, B and C – with prices ranging from 30 to 60 baht per kilogram, depending on the grade and amount.

“We’ll be selling here until the start of Chinese New Year,” he noted.

Asked about the market response in Phuket, he said that langsat are particularly popular among Thai, Chinese and Korean buyers.

“Westerners don’t seem to have the same preference for langsat, but perhaps they’re not as familiar with it.”

Known in Thai as “long gong“, langsat is often confused with another similar fruit, longan (Dimocarpus longan), which is called “lum yai” in Thai.