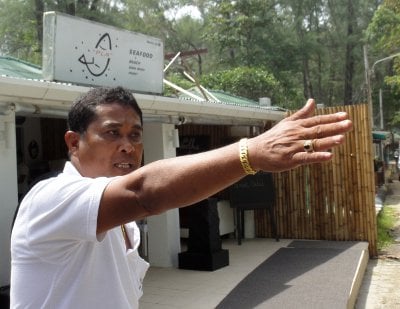 PHUKET: The saga over the stalled clearing of a restaurant encroaching on Surin Beach continues, with the restaurant owners refusing to remove structures and local authorities planning to file yet another report.

Pla Restaurant was spared from a raid on Wednesday morning when a multi-agency task force of no less than 30 officers acting under an order from the Governor was expected to arrive and take action.

Organized to coincide with the passing of a 30-day notice to vacate, the raid was called off after a last-minute missive from Thalang District Chief Narunart Suwanpratheep requesting that no action be taken against the restaurant at this stage.

Oddly, it was Mr Narunart who instigated the investigation into the restaurant’s encroachment on the beach back in July this year, when he asked Cherng Talay Tambon Administration Organization (OrBorTor) president Manote Panchalad to inspect the site.

Thus far repeated attempts by the Phuket Gazette to contact Mr Narunart to find out why the raid was called off have proved fruitless. Mr Narunart has been unavailable for comment.

Yet Cherng Talay OrBorTor President Manote told the Gazette yesterday that he had not given up.

The fight over the right to extend the restaurant up to the water’s edge has resulted in accusations over double standards and influence by “mysterious” people.

“They said we are encroaching on public land, but you can see all along Surin Beach right up to Bang Tao Beach that the beach is being encroached upon,” said Charoen Singkaew, who helps run the family-owned restaurant.

“We are just trying to make the beach look better. This sand we dug from the water right in front of the restaurant. When we remove our tables and decorations [each night when the restaurant closes], everything is fine. We didn’t destroy anything,” he added.

“We have been trying to contact the OrBorTor chief, but he has been ignoring our calls. Now that we have an official letter from Thalang District Chief Narunart Suwanpratheep, I dare anyone to remove any part of our restaurant against this order. I will file a complaint over removal of private property,” Mr Charoen warned.

Somsak Boontapatipa, the head of the family-run restaurant, was just as angry. “Why do we have to be the only restaurant to be pulled down? Everyone builds on the beach,” he told the Gazette.

“They said we have ruined the beach environment and the view, but we are actually trying our best to make it better. We built the wall to protect our restaurant and the environment.We even planted some trees and put some more colorful lights to make Surin Beach more beautiful so tourists who come to the beach will tell everyone how beautiful it is,” he added.

Mr Somsak alluded to unspecified “local complexities” that were influencing the issue.

“I know who filed the complaint, but I do not want to name anyone. I would like to hear an explanation from the Cherng Talay OrBorTor,” he said.

“There is no reason to hold off on this. You can see it with your own eyes and they know what they are doing.

“I know they want to talk to me privately, but this is not up for negotiation. They cannot build anything on the beach. If you see anyone else do it, please report it to me,” he said.

“And if they are accusing someone of receiving some benefit from this, please feel free to speak up and name who that person is,” he added.