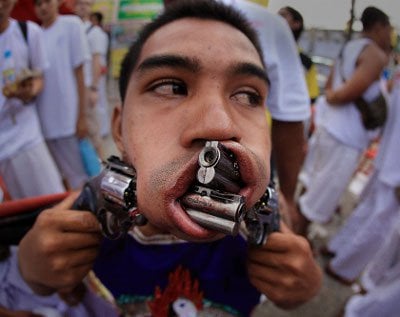 PHUKET: Shutterbugs should move quickly to sign up for the Phuket event of the Fourth Annual Worldwide Photo Walk on October 2, when local and visiting photographers will capture images of the colorful spectacle that is the annual Phuket Vegetarian Festival.

Part of what is described as “the largest global social event for photographers”, the Photo Walk in Phuket will take place over two days next month, giving photographers from around the world a chance to participate.

It is the first time the annual event has coincided with the Phuket Vegetarian Festival, which should give local photographers taking part in the international competition a big advantage over other photo walkers with less dramatic subject matter.

The best photos from each walk will be submitted to the global judging committee, based in Florida, USA.

The walk will start at the Bang Neaw Shrine in Phuket Town at 7am.

Due to the early start, there will be a pre-event meeting at the Royal Phuket City Hotel’s Cafe 154 at 12:30pm on Saturday, October 1.

Walkers who want to share their pictures with the world can do so by posting them on Flickr or sending them to: editor@phuketgazette.net