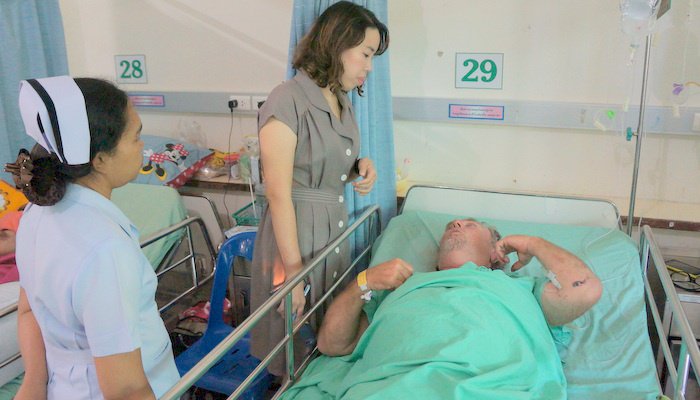 PHUKET: An employee at a bar in Rawai who brutally attacked a British expat with a baseball bat has been charged with assault, police have confirmed.

Sarawuth Kongphat, 37, an assistant at the Green Leaf Bar, beat customer Christopher Stark with the bat and fractured his skull, after Mr Stark discovered he did not have enough cash to pay for his drinks (story here).

“Mr Sarawuth accused Mr Stark of punching him first, but we found no evidence of bodily harm to Mr Sarawuth that supported his allegation,” Lt Chollada Chokdeesrijun of the Chalong Police told the Phuket Gazette.

Mr Sarawuth was escorted by police last Tuesday to meet with Mr Stark, who is still recovering at Vachira Phuket Hospital.

Lt Chollada said that with no evidence to support his story, Mr Sarawuth finally admitted to the assault.

“He has agreed to pay all Mr Stark’s medical expenses at Vachira Phuket Hospital, which amount to more than 150,000 baht.”

Lt Chollada added that Mr Stark’s insurance claim to cover medical expenses had been delayed, forcing him to stay in hospital until the matter of who was to pay the bill could be resolved.

“It was necessary to bring Mr Sarawuth to meet with Mr Stark and discuss the bill, otherwise Mr Stark couldn’t leave the hospital,” she said.

However, the matter of compensation for Mr Stark, who has been in hospital since January 23 after undergoing brain surgery for a hematoma, still needed to be discussed, said Lt Chollada.

“Compensation for the injury was not agreed upon at the meeting. That part will be up to them to negotiate,” she said.

“We will finish the paperwork for the assault charges against Mr Sarawuth and present them to the prosecutor’s office as soon as possible.”

Mr Stark is expected to leave hospital in the next few days.