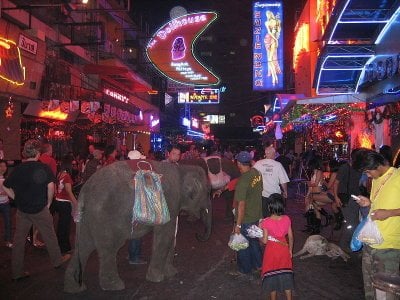 PHUKET: Good news for the Phuket tourism industry comes from a recently-released report by MasterCard that has Bangkok nestled into third place on the credit card giant’s list of major cities with the most tourist arrivals.

“Bangkok is again the number one destination city in Asia, a reflection of its strong and abiding appeal to tourists from the rest of the world,” the researcher wrote in his summary.

The report covered 42 cities in Asia-Pacific.

The figures for Bangkok, which will retain its third-place status from last year, project a 6.5 per cent increase in tourist arrivals from 2011, when 11.5 million people visited – despite massive flooding that devastate the city in the last quarter of the year.

Rounding out the top five were fourth-place Singapore (11.8mn projected visitors in 2012) and Istanbul (11.6mn).

Despite its relatively low cost for accommodations, Bangkok also ranked third in terms of total tourist spending after only London and New York. The report predicts a 16.6 per cent rise in total tourist expenditure to 598 billion baht by year’s end.

The researcher noted that the high expenditure was the result of longer stays by tourists compared to other cities that made the top twenty.

The main source cities of tourists arriving in Bangkok were listed as Tokyo, Singapore, Hong Kong, Seoul and Kuala Lumpur.

The reporter predicted the top ten destination cities in Asia-Pacific in 2012 as:

Phuket was not among the 42 cities in the Asia-Pacific region covered in the analysis, although some have projected that the current banner year for tourism could see total passenger traffic at Phuket International Airport surpass the 9 million mark this year.

Meanwhile, a report released by the Tourism Authority of Thailand yesterday reported a 31 per cent year-on-year increase in tourist spending from 2010 to 2012, with total earnings of 776 billion baht.

“The figures show that Thailand has recorded clear increases in both quality and quantity of visitor arrivals. The growth in total number of visitors is being matched by increased average length of stay and average-daily expenditure, further underscoring the role of tourism as one of the most important economic sectors and contributors to job creation and nationwide income distribution,” the report reads.

Thailand recorded 19.23 million international visitors in 2011, up by 20.67 per cent over 2010, with an average length of stay of 9.64 days and an average daily spending of 4,187.12 baht per person, according to Ministry of Tourism and Sports figures.

Blade runner – I will run quick