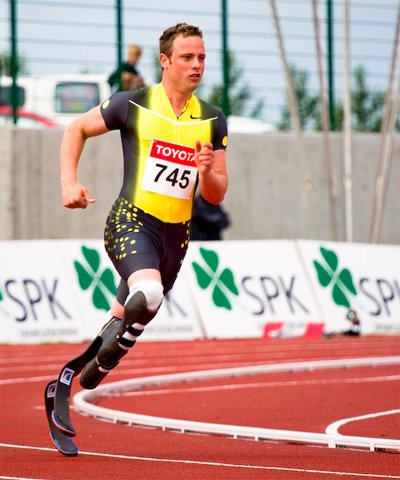 PHUKET: The London Olympics are just over a week away and one man knows he is lucky to be going. South African Oscar Pistorius, known as Blade Runner, had both his legs amputated below the knee when he was a baby and runs with the aid of carbon fiber lower legs.

Pistorius will compete in the individual 400 meters and the 4×400 meters relay even though he failed to meet the Olympic qualifying time in trials. He admits that the South African Olympic Confederation (SASCOC) has shown a lot of faith in him.

“Now that SASCOC has backed me and shown that they believe in me has added a little bit of pressure. But regardless of what external pressure there is, I always give my best on the day so I hope that in London I will just have a clear mind. I know if I enjoy it and I run a relaxed race, I will run quick.”

The path to the Olympics has not been an easy one for Pistorius. In 2008, three judges at the court of arbitration for sport unanimously decided that his prosthetic limbs did not give him an athletic advantage over able-bodied athletes. But the debate over his participation in able-bodied events has continued since then, with Olympic 400 meter legend Michael Johnson recently commenting ‘we don’t know for sure whether he gets an advantage from the prosthetics that he wears it is unfair to the able-bodied competitors.’
Pistorius is trying to ignore the attention around him and focus on what he has spent the last 6 years striving towards, competing in the Olympics.

“Trying to get the Olympic time has been a bit of a challenge. When I came to Europe I was just struggling a bit. I had a niggle with my hip and it was amazing how that set me back in the first couple of races.

“Because we had so many races planned in a short period of time, it did not give me much time to get the issues sorted out. Finally when the team was selected, knowing that I have made the 400 meters individual and the 4 x 400 meters relay was just a dream come true and a massive blessing.

“It has been six years of a lot of hard work and sacrifice from our end, not only from me, but from my team. My coach has put in a lot of time and effort and the various trainers that I have and my family and friends. I have got a lot of people to thank for my position that I am in.”

Oscar Pistorius was speaking to Laureus.com.

Phuket lifeguards save 333 swimmers after return to beaches