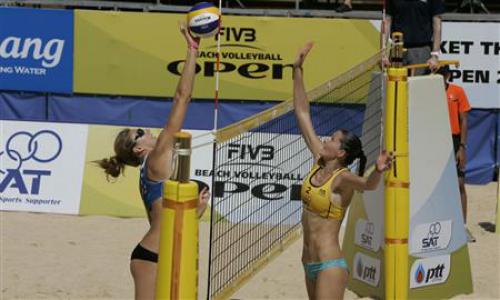 PHUKET: Svitlana Baburina and Diana Mulenko from Ukraine knocked out top seeded qualifiers Sweden’s Nina Grawender and Karin Lundqvist at the 2013 FIVB Beach Volleyball Phuket Open yesterday. The penultimate Open of the year is back in Thailand for its eighth consecutive year, taking place from October 28 to November 3.

Baburina/Mulenko had the longest time on court in the morning against Chinese pair Fan Wang and Yixin Zheng in the first round of qualification. After 52 minutes, the Ukrainian’s secured their spot in the afternoon 2-1 (21-16, 18-21, 17-15), where they met Grawender/Lundqvist.

Ukraine took the first set on center court 21-19, but it was unclear which way the result would finally swing. However, Baburina/Mulenko took command in the second leading 10-4. Grawender/Lundqvist stepped up a gear pulling back a number of points, but Ukraine never allowed the Swedish girls to catch up.

Becchara Palmer is back on the FIVB circuit after questioning her beach volleyball career after the London Olympic Games last year. She is testing the sand in Phuket with new partner Zina Stone and the pair got off to a great start beating China’s Meimei Lin and Ningya Tang in the morning. Palmer/Stone then had a tough time in the afternoon and were knocked out by Russia’s Olga Motrich and Daria Rudykh.

“Today has probably been one of the hardest days of volleyball I’ve played in a long time. We both had a bit of food poisoning, so physically we were both a bit wrecked. So it was such an emotionally draining day and to have to come out and play,”said Palmer.

We played really well this morning, I was so proud of us and this afternoon we had patches that we were really strong but ultimately I think this morning took it out of us.”

Despite failing to make it through to the main draw, it is early days for Palmer/Stone and the team is optimistic for their ultimate goal, the Rio Olympics in 2016.

“You always know it’s going to be warm here and considering we haven’t played any world tour this season it’s always a tough ask to come in at the end and battle against teams that have been playing all year. We just wanted to play our best and leave with a smile on our face. It might take us a couple of days but we learnt a lot,” said Palmer.

Australia had three teams that progressed through to the afternoon, Mariafe Artacho and Nicole Laird, Jordan Mowen and Justine Mowen and Becchara Palmer and Zina Stone, but none managed to grab an elusive main draw spot.

Teresa Mersmann and Isabel Schneider secured their main draw position beating Ayumi Kusano and Sakurako Fujii from Japan 2-0(21-15, 21-14) in their only match of the day.

“It’s really hot here so we’re lucky that we only have one game today. We’re very happy about our win and that we are in the main draw now,” said Schneider.

“We love it here. We arrived on Sunday and saw the beach. The people are friendly and it’s really nice.”

“It would be good if we win a game in our pool, so we can come out of the pool. After that we will just play and have fun and try everything to win,” said Mersmann.

Phuket is an island located to the south of Thailand, while the city of Phuket is the island’s capital and home to 75,000 people. It is located 825 kilometers from Bangkok, the capital of Thailand.

This will be the eighth successive year that Thailand has staged an Open series women’s event on the FIVB calendar.