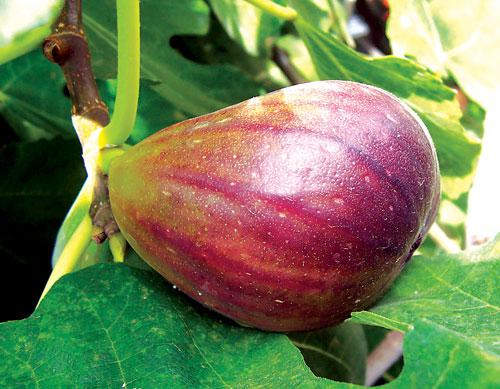 PHUKET: In Saint Luke’s Gospel, Christ delivers a parable about a fig tree, barren for three years, in which the owner is exhorted to cut it down. The owner pleads: “let it alone this year “so that he can “dig about it and dung it. And if it bears, well: And if not thou shalt cut it down.” In another incident in St Mark, which demonstrates the efficacy of prayer, Christ curses an unfruitful fig tree and it miraculously withers.

One wonders why the humble fig was singled out for these divine interventions. Partly, I would guess, because the edible fig (ficus carica) was, like the date, an ancient symbol of fertility, as well as being a staple of the local diet familiar to everyone. A modern biological explanation of its infertility would probably point the finger at the absence of agaonid wasps (see last week’s article) to pollinate the flowers.

Pardon the digression. But it is worth remembering that ficus carica is the only member of this huge genus to produce edible offerings. Other figs have very different attributes.

Take F.elastica. which hails from Asia and looks nothing like the Biblical species. It achieved sudden fame in the nineteenth century as the primary source of “caoutchouc”, a milky fluid tapped from its trunk which solidified into rubber. Sounds familiar? Well yes. It was the forerunner of another and unrelated rubber tree called havea Brasilienis which was imported from South America and, once established in Asian plantations, soon superceded the fig tree.

Oddly, F. elastica enjoyed another claim to fame in the fifties when it became the archetypal house plant, its geometrical form and shiny surfaces complementing the hard edges of Modernist architecture. It was, I recall, the first indoor plant to arrive in our household. Nowadays, there are many cultivars: “Burgundy” has rich red leaves, “Aurea marginata” has yellow edged foliage, “Tricolor” has gray leaves with pink variegations. Constrained by a pot, these plants will not get out of hand, but despite their sumptuous foliage, they are not suitable for a small garden in the tropics.

Another fig, benjamina, has also become more sought after as a house plant, or for use in patio tubs or planter boxes. It is often seen in garden centers as a specimen container plant, often in a variegated form, with its slender trunks plaited together, or as a subject for topiary. In its native rainforests, as with the rubber tree, benjamina will rocket skywards, but it will be more manageable in a domestic setting, especially if you go for cultivars such as “Baby Ben”. Though it sometimes carries small red fruits, its charm, as with most figs, resides in its foliage which consists of small, narrow glossy leaves which hang gracefully downwards. Hence its common moniker of weeping fig.

F. lyrata, known as the fiddle-leaf fig has large, deeply veined and corrugated leaves which make it a most appealing specimen tree, but F.dammaropsis has the most spectacular foliage of all. From the highlands of New Guinea, this fig has leaves up to three feet across, again with very pronounced veining. However, it is less suitable as a garden ornamental on account of its straggling growth habit.

At the other end of the scale are varieties which are more shrubs than trees. F. deltoidea is a small attractive variety with densely packed, round leaves and masses of white to pale pink berries that vaguely resemble those of mistletoe. In the wild, the mistletoe fig tends to grow in the forks of trees, but, in Thailand, where it is considered lucky, it is usually cultivated as a pot plant. But try it on a sunny bank or over a rocky outcrop. It is widely available in plant nurseries.

Even smaller is the creeping fig. F.pumila literally does creep, clinging, ivy-like, to any available surface. Invaluable for covering any unsightly wall, it will need clipping from time to time. Apart from that, it is low maintenance – as are all figs.

Tip of the week – More than just honey-makers

Always encourage bees in your own patch. People think of them as a source of honey, but a far more important function is their role as pollinators.

Without bees, global production of fruit and vegetables would slump alarmingly. One third of the human food supply is dependent on successful pollination.

Even in your garden, honey and bumblebees have a profound effect on the blooming and fruiting capacity of your plants.

Unfortunately, bees are in serious decline. The reasons are not hard to find: Indiscriminate use of pesticides, loss of flower-rich habitats, a deadly combination of a virus and a fungus, worse, a parasitic mite which invades hives and destroys entire colonies.

So, as responsible gardeners, we must cherish them and encourage their presence. If you have wild bees nesting in one of your trees, leave well alone. Moreover, do not encourage sellers of wild honey by buying their product.

Phuket Gardening – A fly in the ointment

A blessing in disguise – Phuket In Focus