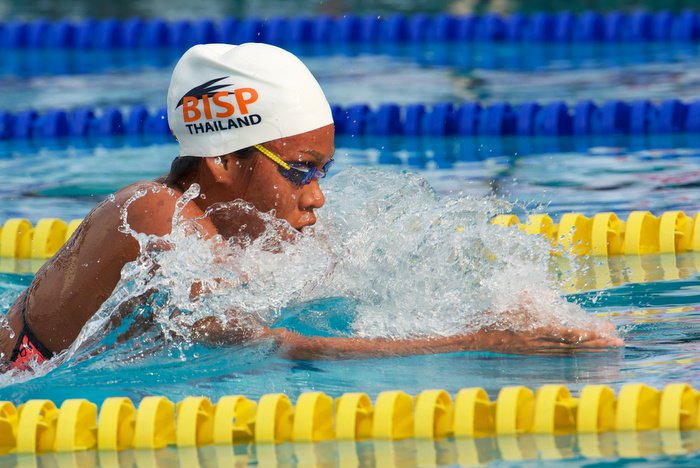 PHUKET: When the JSA Swim Academy at British International School Phuket first took to the pool in August 2013, the team had five international swimmers on scholarship, four swimmers from the school’s Flying Fish club team and high hopes.

Heading into 2015 the team, which has grown in numbers (nine girls and eight boys), have already racked up new national and international age-group records and two have qualified for the 2016 Olympic Games in Rio de Janeiro.

“So far this year we’ve broken 41 national records,” said Coach Simon Jones. “I now have 19 international swimmers in the program and will be up to 25 in August with new swimmers coming in. We have a very unique situation here. The school supports my swimmers on the academic side by giving them a little more time for school work, tutoring, and training to allow them to attain a high level of achievement in academics and sports.

“A lot of schools try to combine scholarship with athletics, but are not as committed as we are and that’s because of Headmaster Neil Richards,” Mr Jones added. “Neil strongly believes that sports builds character and the discipline that will help our students achieve their goals during their lifetime.”

“Eing is our best female swimmer,” Mr Jones said. “She made the finals in the 200-meter breaststroke at the 2014 Asian Games and has already qualified for the 2016 Olympics in the 200m individual medley (IM). She has until next June to qualify and I expect her to qualify in five events.”

“Wong has qualified in the 100m breaststroke and recently broke the Malaysia record,” Mr Jones explained. “I expect him to qualify for two events in the Olympics.”

Mr Jones said two other strong swimmers who may qualify for the Olympics are Filipino Roxanne Yu, 18, who recently graduated from BISP and has a scholarship in the United States to Miami University, Florida, and 15-year-old Hendrik Faber of the Netherlands.

Roxanne has established several national records and Hendrik has Holland’s fastest-ever times in the 400m, 800m and 1500m freestyle, the 200m butterfly and 400m IM.

Next up for the BISP swim team is the Federation Internationale de Natation (FINA or International Swimming Federation) World Championships in Singapore.

“I’ll be taking Eing, Wong, Roxanne, Raine Gavino [Philippines] and Chantgal Liew [Singapore],” Simon explained. “Between the five of them, they will compete in 15 races, plus the 4x100m medley, 4x100m freestyle and 4x200m freestyle relays. Hopefully, we’ll be in 15 finals and have 15 medalists.”