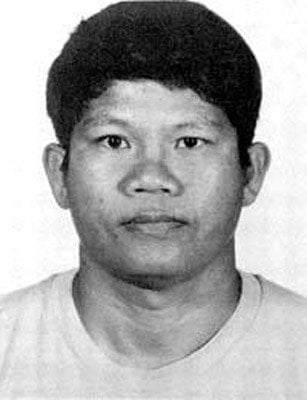 BANGKOK: Thai and US law enforcement officials today announced a 1-million-baht reward for information leading to the capture of Saner Wonggoun, a most-wanted US fugitive believed to be hiding in Thailand.

Saner, alias “Shorty” or “Buck”, is wanted in connection with the 1994 murder of his pregnant wife and their eight-month-old unborn child.

On August 1981, he married Sopha Yodpet and they later had two children.

In January 1994, the body of a pregnant woman, later identified as Sopha, was found wrapped in a sleeping bag and dumped along a deserted road in California. When the police attempted to contact Saner for questioning, they discovered he had abandoned his two children with a neighbor and bought a one-way ticket to Bangkok. Thai Immigration has confirmed that Saner arrived in Bangkok on January 14, 1994.

Saner’s last known location is Thailand. His hometowns are Nakon Nayok and Prachinburi. Saner is currently 59 years of age. He was 150 centimeters (5′ 0″) tall and weighed 61 kilograms (135 pounds) at the time of the murders.

He had a 3.5-cm scar on the left side of his chin and a scar on his left wrist. He can speak English and has worked as an artist and gardener. Saner may have changed his name and/or appearance to avoid capture.

Persons with information about his whereabouts or activities are asked to immediately contact one of the following numbers or email addresses. The identity of callers will remain strictly confidential.