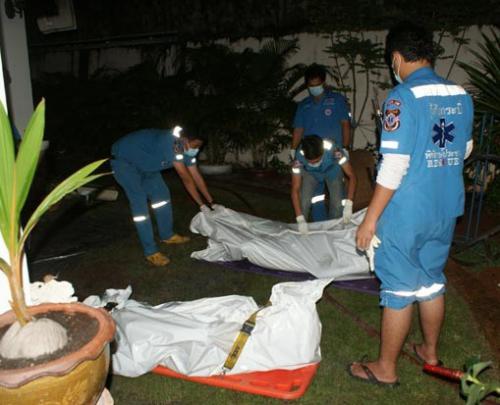 PHUKET: Australian real estate agent Richard Port and his 17-year-old step-son were trapped and killed in a house fire that police suspect was intentionally started across the bay from Phuket early this morning, in Ao Nang.

“Nobody was able to leave the house as the fire block all the exits. We could hear a woman screaming for help through the front window,” said Krabi Town Police Deputy Superintendent Noppadol Mukda.

Firefighters immediately rescued Mr Port’s wife, Naruthai, by removing the window bars from the front window. She suffered from serious burns on 60 per cent of her body and was rushed to Krabi Hospital for treatment.

It took firefighters about 20 minutes to control the blaze at the Watchara Home housing estate.

“We went inside to inspect the house and found the burnt body of Mr Port face down by the bed,” said Lt Col Noppadol. “The body of Mrs Naruthai’s 17-year-old son, Worraphat Sukkaew, was found lying face down in the kitchen.”

At the back of the house, police found a 16kg cooking gas cylinder with the valve open and the rubber tube cut to allow a free flow of gas, Col Noppadol explained. Additionally, two motorbikes were found with seats lifted, gas lids removed and towels soaked with fuel dangling from the tanks.

“We were able to move the two bikes away from the house before they caught fire and exploded,” Col Noppadol said. “It’s very lucky that the motorbikes didn’t blow up.”

Based on the evidence, police believe that the killings were part of an arson attack.

One of Mr Port’s neighbors, Boonsir Ubon, 62, told police that she had received a call sometime after 2am from Mrs Naruthai asking for help.

“I immediately called police for her,” Mrs Boonsir said.

Mrs Boonsir also confirmed to police that the couple had been involved in Ao Nang real estate.

Police are waiting for Mrs Naruthai, who is in stable condition, to recover before questioning her about the incident.