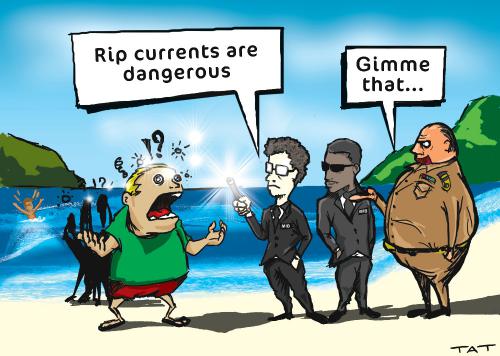 PHUKET: While wishing ‘Safer Phuket’ (story here) the best of luck in its difficult mission to raise marine-safety standards in local waters to international levels, it is clear that the new NGO’s success will depend on its ability to change a deeply-entrenched “culture of carelessness” that pervades locally, both on land and at sea.

This will be no small challenge. The need for better safety standards is both obvious and well documented in this week’s edition (story here), which recorded the Thai Navy’s well-conducted effort to evacuate tourists from resort islands following a storm that caught the region off guard despite weather warnings and ports being closed.

Fortunately, there were no reports of casualties, but the damage and destruction of several well-known racing sailboats from unexpected heavy seas once again highlights the dangers of inductively assuming that calm seas will always prevail at this time of year.

Of course, tragedy can strike under any conditions, as was most recently demonstrated by the drowning death of young Chinese tourist Gao Yang, who slipped from wet rocks and fell into the sea at Promthep Cape (story here) on November 20.

The young man’s death was met with typical knee-jerk reactions, such as the Provincial Office promising to erect signs in a number of languages warning of the dangers of slippery rocks at Phuket’s most iconic scenic vista.

Safer Phuket aims to garner partnerships with a variety of groups including the Phuket Lifeguard Club, local tambon administration organizations (OrBorTor) and the Royal Thai Navy. For the organization to achieve its aims, it will need to establish formal agreements with these and many other groups, liaising closely with them to engender a more proactive approach to maritime-safety issues.

Showing an understanding that change must come from all sides, Safer Phuket’s website was launched with pages in both English and Thai. Its ability to attract Thai readers and sponsorship will likely determine its success. Far too often in Thailand safety issues are presented as a sort of “foreign” concept.

The expat community also has a role to play. Many, many foreigners come here and, enthralled by this “culture of carelessness”, readily engage in behavior they would never dream of back home, particularly on the roads.

It is essential that the expat community work with Safer Phuket to help in the considerable challenge of reversing this trend by setting safety examples, rather than “going with the flow”.

Lastly, we hope the new NGO will use its considerable diplomatic clout to encourage Thai civil aviation authorities to order in-flight warnings to passengers aboard inbound flights about the dangers of rip currents, especially during the southwest-monsoon season, as has been advocated in vain in this space for several years.