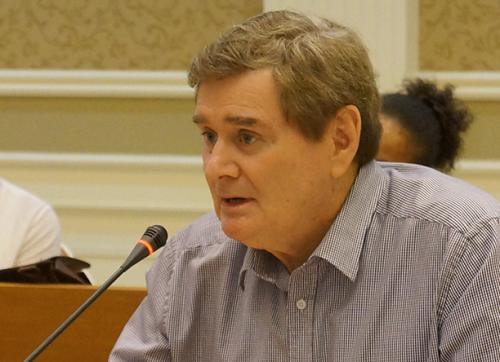 Australian Ambassador to Thailand James Wise paid tribute to him. “Australia could not have wished for a more committed and energetic honorary consul,” he said.

“The numbers of Australians visiting Phuket in recent years has risen enormously, and so has the demand for consular services. Mr Cunningham has responded quickly, effectively and compassionately to this growing demand.

“Australian visitors as well as long-term residents have valued his contribution very highly. He has managed their day-to-day concerns efficiently.

“In addition, he has strongly and sympathetically supported Australians who have faced complex and sometimes tragic circumstances.”

“No matter the time of day or night, or the nature of the problem or emergency, Mr Cunningham was willing to help,” Ambassador Wise said.

Speaking to the Phuket Gazette this afternoon, Mr Cunningham said of his retirement, “Basically, I am getting old! It happens to all of us. But I have been blessed to have spent so much time here – 12 very hard-working years – on this extraordinary island.

“However, I do have to re-prioritize. I have three grand-daughters now, so I want to spend more time in Australia with them. I have appointed a new general manager for my resort and am planning to spend much more time in my home country. I’ll divide my time 50/50 between Australia and Phuket.

“I can’t bring myself to leave altogether – I have deep roots here, and many cherished friends in the community.” he said.

Ambassador Wise also paid tribute to Mr Cunningham’s efforts to improve the safety and well-being of all tourists in Phuket.

“Mr Cunningham is an enthusiastic advocate for Phuket. He knows that Phuket will prosper only if tourists and residents continue to feel safe and welcome there. He has worked tirelessly to draw to the attention of authorities any issues of concern.”

Mr Wise also acknowledged the assistance of Mr Cunningham’s Thai staff, who have supported him as Honorary Consul.

“Their efforts are also deeply appreciated,” he said.

Phuket teaches Russian, Chinese and Korean tour operators how to be legal