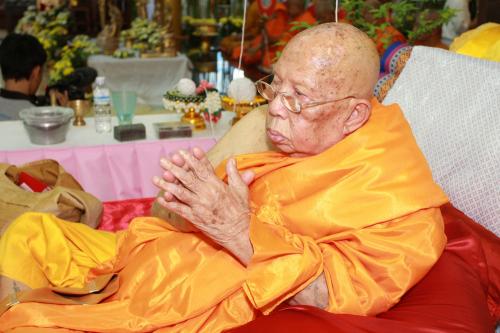 PHUKET: Followers of revered monk Luang Pu Supha will travel to his final resting place in Sakon Nakhon Province, in Northeast Thailand, to honor the man who became one of Phuket’s best-known monks.

Formally known as Phra Mongkol Visut, Luang Pu Supha died at 5:20am today, confirmed Piyawat Seehaworrachart, who had served the revered monk since 1959.

“I was very sad towards his death. I received many calls asking me to confirm his death because rumors had been circulating before his death that Luang Pu Supha had passed away,” Mr Piyawat told the Phuket Gazette this afternoon.

“Some people came to the temple themselves just to check the news about his death,” he added.

At 9am tomorrow, Luang Pu Supha’s body will be moved to a pavilion on the water at Wat Konsawan where monks and the general public can pay their respects.

In the evening at about 7pm, the first full funeral prayers will begin.

No ceremony will be held at Wat Luang Pu Supha in Chalong, which was founded only a handful of years ago by the long-living monk.

Having helped build 38 temples throughout Thailand, Luang Pu Supha is regarded as an iconic theological figure and inspiration by many.

The atmosphere inside the temple today was quiet. Only a few people came to buy Luang Pu Supha amulets or other sacred objects.

“Soon my friends in Phuket, who are all disciples of Luang Pu Supha, and I will travel to Wat Konsawan to pay our respects to him for the last time,” Mr Piyawat said.

Although Luang Pu Supha was not recognized by Guinness World Records as the World’s Oldest Living Man, if his documents were correct he would have claimed the title.

His birth certificate, said to have been issued two years after he was born, reads September 17, 1896.

Nevertheless, in order to be verified as the World’s Oldest Man, Luang Pu Supha – or someone on his behalf – would have needed to inform Guinness World Records of his desire to claim the title.

Luang Pu Supha expressed no interest in doing so.