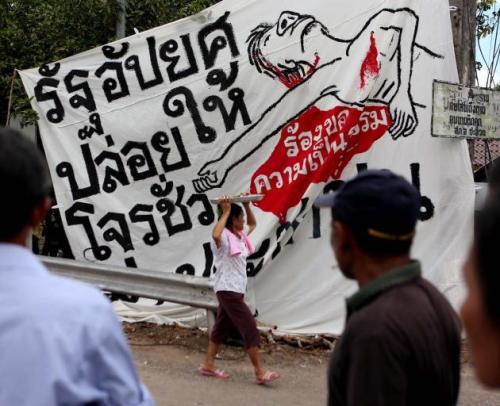 Jens Orback, Sweden’s former minister of democracy, said nations have diversities and difference, so groups in all countries need to build trust. One important element is civil society groups, as they play a key role in democracy. Civil groups must be independent from state control and intervention, he said.

Stephen Stedman, deputy director of Stanford University’s Center on Democracy, Development and Rule of Law, said elections were meant to elect people to positions of power. So they must be honest, not only during the voting time but every day. If elections were honest and people in power acted with accountability, there would be reconciliation, he said.

Polls must be clean, transparent, and open to scrutiny by independent bodies and the winner of an election would earn the right to make decisions and policy, he said.

Kent Harstedt, a member of Sweden’s parliament, said while foreign speakers joined the forum yesterday to share experiences, decisions about reconciliation must be made by Thai people.

Michael Vatikiotis, asian regional director at the Centre for Humanitarian Dialogue, said there were conflicts in democratic processes in many countries in Southeast Asia, such as Indonesia, Myanmar and Cambodia. Talk was one way to end conflict and bring reconciliation. Indonesia and the Philippines had experience in using dialogue and negotiation to end conflict, he said. However, there were no perfect solutions to end conflict, he noted. Peace and reconciliation required understanding and trust, as well as transparent and responsible government, he said.

Justice Ministry permanent secretary Kittipong Kittayarak, a former member of the Truth for Reconciliation Commission of Thailand (TRCT), said the commission had carried out its duty with neutrality and advised the government to refrain from creating conflicts.

“We must first know what the roots of our conflicts are. We need to press charges in some cases while we have to forgive and forget in other cases. The TRCT has suggested that a national stage to reach national reconciliation must be continued,’ he said.

Thongthong Chandransu, permanent secretary of the PM’s Office, said the government had decided to hold 108 events for the red and yellow shirts to discuss solutions to the country’s division.

“We have seen them talk sensibly to each other in a good atmosphere, which might be difficult to happen otherwise,’ he said.

Prime Minister Yingluck Shinawatra indicated support for such an event, saying that there would be another forum to follow, without elaborating when.

“We explained to him again that the government is not really sincere about political reform. They also refuse to review the consideration of an amnesty bill as the bill would create more division and negative impact on the political system,” deputy Democrat Party leader Korn Chatikavanij posted on his Facebook page.

The meeting with Blair, party leader Abhisit Vejjajiva and Korn was requested by Blair, as he knew that the Democrats did not join the political reform process, the former finance minister said.

Korn later told The Nation in a telephone interview that this political forum should not have been hosted by the government, adding that non-partisan organisations should have been allowed to take charge.

“We told Blair that ‘legal principles’ are important in a democratic society. He agreed and understood our stance,” he said.

Blair was invited by the government to be the keynote speaker at the forum on “Uniting for the Future: Learning from Each Other’s Experiences” forum held by the Foreign Ministry yesterday.

After the morning session ended, the former UK premier lunched with Abhisit and Korn at the residence of the British ambassador.


Shooting of protest guard stemmed from previous dispute: police
The Nation / Phuket Gazette
PHUKET: Police will issue an arrest warrant soon for a Nakhon Si Thammarat man for the fatal shooting on Sunday of a guard at a rubber growers’ protest. The shooter had a grudge from a previous conflict with the deceased man, the national police chief alleged yesterday.

Gen Adul Saengsingkaew said the other seriously injured guard was an innocent bystander.

Meanwhile, the protest to be held in neighboring Surat Thani today (Sept 3) by rubber growers in the South could draw at least 10,000 people. So, police yesterday prepared about 1,000 officers from Surat Thani, Phuket and Phang Nga to handle the crowd.

Prime Minister Yingluck Shinawatra said yesterday, before flying to China to attend the 10th China-Asean Expo in Nanning, that the Internal Security Act would not be implemented for the rally in Surat Thani. Related agencies would cooperate to control the demonstration and talk to protesters, she said.

In regard to the shooting at the protest at Ban Toon railway crossing, police spokesman Maj-General Piya Uthayo said police interviewed four hospital staff and six youngsters and guards who witnessed the “close range” shooting. He said the protesters had only let five unarmed officers gather evidence so far.

Piya said two protest leaders tried to stir up the protesters and escalate the protest, and that they had appeared at the anti-Thaksin regime protest at Lumpini Park in Bangkok. So, police would probe to see if there were links to that movement.

Earlier, Deputy PM Pol Gen Pracha Promnog said police found that witnesses said they saw the deceased in an argument prior to the shooting. Pracha said that, as a gunpowder test on the injured guard showed the shots were fired at close range, police presumed it was not done by officials, most of who were camped 10 kilometres away.

He said the shootings took place at a protest site that was tightly guarded, so outsiders or officials could not get in to shoot the guards.

Pracha urged the Rights and Liberties Protection Department chief Police Colonel Narat Sawettanant to visit the province and provide some Bt100,000 in assistance money to the deceased man’s family. Pracha said he would call a National Security Council meeting late yesterday to assess the situation at Nakhon Si Thammarat because people were adversely affected.

Meanwhile, the body of protest guard Sirichai Boonnuwong, 29, was sent for an autopsy at Surat Thani Hospital. The injured guard Sitthisak Chaingam, 25, remained in an intensive care ward with hourly surveillance at Maharat Hospital in Nakhon Si Thammarat.