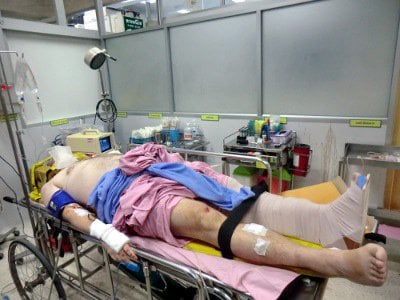 PHUKET: Two weeks after falling from the 18th floor of a Patong hotel, a 39-year-old Australian tourist has been moved from the Intensive Care Unit (ICU) to an orthopedic ward at Vachira Phuket Hospital.

The man, originally from Sydney, suffered broken ribs, a punctured lung and serious injuries to his left leg when he fell from the balcony adjoining his room at the Royal Paradise Hotel & Spa.

A spokesperson for the hospital’s International Department told the Phuket Gazette today that the Australian was breathing unaided and had been taken off life-support equipment.

“He still cannot sit, but responds well to stimuli and can eat and speak normally. However, he will need treatment for at least a month to allow the multiple fractures to start to heal,” she said.

The spokesperson added that although the man is now on his own, his sister had visited and remained with him for three days before she returned to Australia.