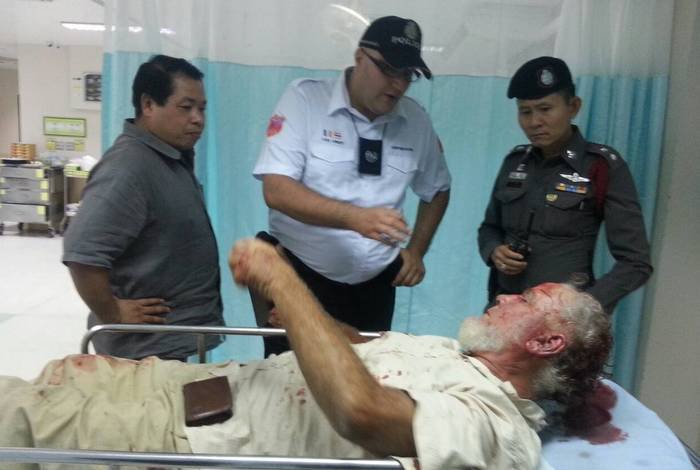 “Nightclub staffers told us that Mr Pendlebury had been very drunk and was trying to take a video clip of a confrontation outside of the club,” Col Sutthichai said.

Mr Pendlebury was attempting to record Tai Pan bouncers dealing with two groups of tourists. The French and Italian tourists had an issue inside the club and had been removed, police explained.

“Mr Sanya approached Mr Pendlebury to stop him from taking the video. They ended up getting into an argument and Mr Pendlebury stabbed Mr Sanya,” Col Sutthichai said.

Mr Pendlebury fled the scene, with some staffers in pursuit, while others called police.

“Staff managed to apprehend him in front of the Bangkok Bank Patong Branch on Rat-U-Thit 200 Pi Road. He still had the 20-centimeter-long knife used in the slaying,” Col Sutthichai said.

Mr Sanya was rushed to Patong Hospital with a fatal puncture wound to his chest. He was pronounced dead within an hour of the incident.

Mr Pendlebury sustained some head trauma during his attempt to flee, police said.

“He confessed to us that he was the one who stabbed Mr Sanya,” Col Sutthichai said.

Mr Pendlebury is being held at Patong Police Station for 48 hours before being brought to the court. The Australian Embassy has already been notified of the incident, Col Sutthichai said.