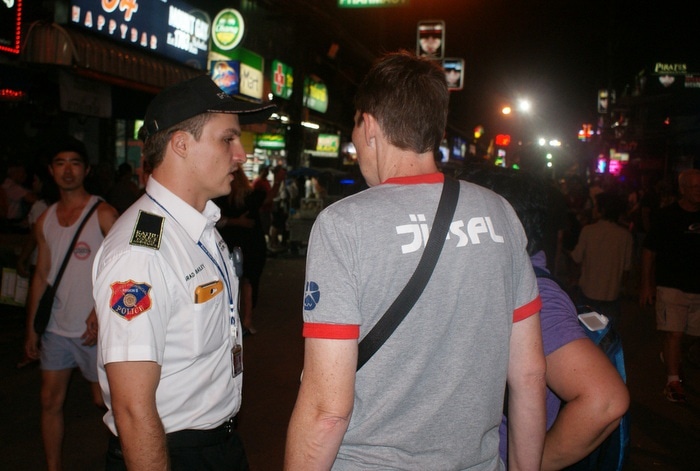 PHUKET: Volunteer police officers working the beat in Phuket’s main party town have gone on strike until the Patong Police are able to address a series of issues.

“We will have a meeting tomorrow at 10am to explain our frustrations, and also to discuss how the volunteers can continue working with police in assisting foreigners and tourists in need,” Wal Brown, long-term Phuket expat and co-ordinator of the Royal Thai Police Region 8 volunteers on the island, told the Phuket Gazette this afternoon.

“We have had a series of issues [arising from] working with the police, especially new police with little or no English [language skills]. I can understand their frustration as well,” Mr Brown said. “I haven’t condemned the police. I realize they have an agenda, but they have to help a bit. Work with us and treat us with respect.”

The volunteers have decided to stop joining patrols until they receive help from Patong Police Superintendent Chaiwat Auikam, who told the Gazette today that he was unaware of any friction between his police officers and the volunteers.

“Having the assistance of the volunteers is very useful. Sometimes the issue is communication,” Col Chaiwat said. “I am more than willing to talk with them. I would prefer that there not to be any problems on the team.”

Mr Brown agreed with Col Chaiwat that one of the major issues was a breakdown in communication.