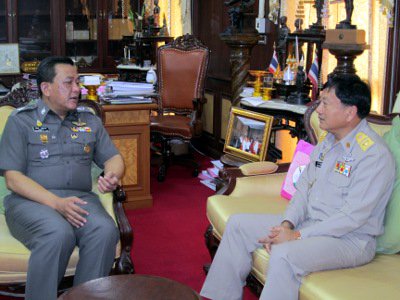 At the 11:30am meeting at Provincial Hall, Maj Gen Chonasit said his priority since he started work as the Phuket Provincial police chief on December 29 has been to ensure the safety of the public during the New Year’s festivities at Saphan Hin, Patong Beach and Karon Beach.

“The safety precautions taken during the holiday period were successful,” he said.

Now safely through the holiday season, Maj Gen Chonasit plans to start cracking down on narcotics in local communities.

“We will ask the heads of communities and religious leaders to keep an eye on residents in their areas. We will also have police officers start educating these community leaders on their role in narcotic crackdowns in addition to incorporating them into an information network,” said Maj Gen Chonasit.

Next on the superintendent’s to-do-list is to resolve Phuket traffic jam issues.

“I have heard many complaints about the traffic jams in Phuket. I would like to ask people to follow traffic laws and to park only where it is permitted. This will help resolve some of the traffic problems,” he said.

Maj Gen Chonasit also explained that he plans to crack down on crime in general in Phuket in order to make the island safer for both residents and tourists.

“Even though I have never worked in Phuket, I have will serve Phuket. Please give me some time, so you can see my work and judge if it is as good as you would like it to be,” he said.