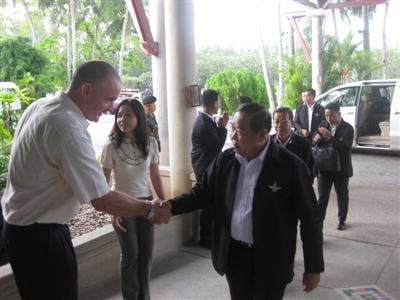 PHUKET CITY: Thailand will enforce its Internal Security Act in Phuket during the upcoming 42nd Asean Ministerial Meeting and related activities to be held at Laguna Phuket July 17 to 23.

Defence Minister Gen Prawit Wongsuwan, who met with other top military brass and local leaders at Sheraton Grande Laguna Phuket yesterday, said today that all preparations for the event were fully completed.

Joint military and police units have been directed to work in teams and local residents will assist officials to provide security at the meeting venues, the state-run Thai News Agency quoted him as saying this afternoon.

Gen Prawit said the enforcement of the Internal Security Act, to be effective over the entire meeting period, will help prevent any untoward incident.

The government is desperate to prevent any possible recurrence of the incident in Pattaya over the Songkran holiday, when the Asean summit meetings had to be postponed at the last minute after red-shirted protesters loyal to deposed former prime minister Thaksin Shinawatra stormed the host venue.

Gen Prawit Wongsuwan said he believed the situation is not worrying, although red-shirt protesters earlier vowed a mass protest if the government didn’t dissolve the House within one month – and the deadline is nearly concurrent with the Asean meeting.

The Internal Security Act will be enforced only on Phuket and will not violate human rights or inconvenience the public, Gen Prawit said.

Phuket Governor Wichai Praisa-ngop, who attended the meeting at Laguna yesterday, said the event will bring in ministers from 21 countries.

US Secretary of State Hillary Clinton is expected to be among the many high-profile figures attending.

The influx of 2,000 members of ministerial entourages and journalists will help revive local tourism and if the regional meetings are successful, the government will confirm Phuket as the venue for the re-scheduled Asean summit in October, Gov Wichai said.

For a full schedule of the events, including post ministerial conferences and the 16th Asean Regional Forum (ARF), click here.