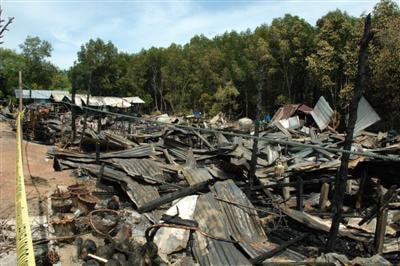 MAI KHAO, PHUKET: Less than five years after it was damaged by the 2004 tsunami, the Ban Hin Look Diow sea gypsy community has suffered another disaster – this time by fire.

At about 1:30pm on Monday a fire broke out in one of the homes and quickly spread to sixteen others, destroying more than half of the village and leaving 85 out of the community’s 215 residents homeless.

Community leader Boonchuey Varee, whose home was destroyed in the blaze, blamed the fire on an electrical short circuit.

All the homes were empty except for one woman with a young child at the time of the blaze, he said.

“We were lucky that nobody was injured or killed in the fire,” Mr Boonchuey said.

However, the fact that homes were virtually deserted at the time also meant there was nobody on hand to douse the flames – even though there is no lack of water in the area. The stilted homes were built over a small lagoon protected from the sea by mangrove forests.

Former homeowner Dao Prabsamud, 35, said it was too early to estimate the cost of the damage or determine in which dwelling the conflagration started.

The modest homes of wood and corrugated zinc panels get very hot at midday and most residents leave them to work or seek shade outside, she explained.

Perhaps having learned a lesson in the aftermath of the tsunami, community leaders were quick to begin compiling lists of all those affected in the hope they will receive the assistance they need to rebuild their lives.

Also taking part in the assistance effort were volunteer rescue workers from the Kusoldharm Foundation, who distributed supplies including dry foodstuffs, water, rice, cooking utensils and other daily life necessities.

Representatives of many other foundations and charitable associations were also on the scene today taking information in order to help the community overcome this latest tragedy.

In his capacity as a UN Special Envoy for Tsunami Recovery, former US President Bill Clinton visited the community in late 2006, heaping praise on the community for their efforts in preserving nearby mangrove forests.

The villagers have every good reason to preserve them: although having occupied the area for six generations, they have no land title deeds. They were told about five years ago by Royal Forest Department officials that they would be allowed to remain there only if the surrounding mangrove forest remained healthy, Mr Boonchuey told the Gazette in April.

He also promised to invest millions to build “culture centers” in sea gypsy communities as a way of preserving the sea gypsies unique traditions and attracting tourists.

Asean meetings in Phuket: Security Act to be enforced