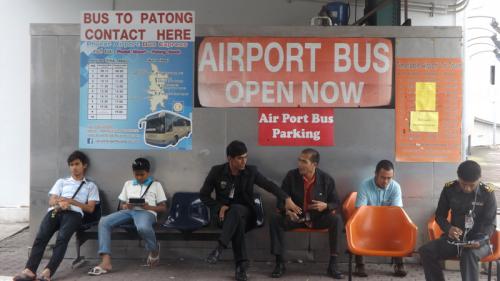 PHUKET: As Airports of Thailand (AoT) and the Airport Express bus company trade blame for the lack of passengers on the Airport-to-Patong bus, tourists continue to find it difficult to locate the bus stop.

The most common complaint voiced by visitors is the lack of information both at Phuket International Airport and on line.

Jean-Elly Longchamps, a first-time visitor to Phuket, said, “I saw the airport bus signs inside and a few outside, but they did not tell us where exactly the bus stop is or where I could buy a bus ticket.”

Bill Daniels, a three-time visitor from the US, has never taken the bus. “There is no counter to give information to tourists,” he said. He also noted that the bus stop area was dirty.

Meanwhile, the AoT countered the allegations made by the owner of the bus company that airport construction materials were blocking access to the bus and concealing the bus signs (story here).

“The building construction area is separate from the bus stop,” said Pakin Sirijun, a Phuket Airport Customer Service officer. “There is only a small area outside the terminal that is currently being repaired, and we set it up so that it would not affect the bus stop.”

Mr Pakin said that the bus company was responsible for making the bus stop attractive for customers.

“We gave them the bus stop area,” he said. “Now the company owner has to manage that area himself.”

Mr Pakin also noted that the airport had added bus signs inside and outside the terminal, and had installed lights at the bus stop.

“I haven’t seen the owner do anything to develop the area,” he added.

Prakob Panyawai, the owner of the Airport Express bus company, said that he had asked the AoT for a counter inside the terminal.

Mr Pakin confirmed that Mr Prakob had been told by the AoT that the topic could be discussed only after construction on the new terminal is completed in 2015.

Mr Yang, the Korean visitor, advised Mr Prakob to put up attractive signs for the bus in many languages.

“I believe many tourists would like to use the service,” he said.