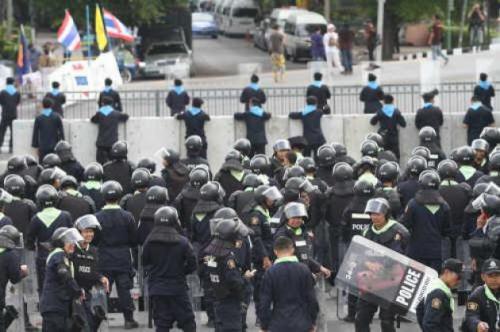 PHUKET: The Government is concerned that protesters from 56 organisations camped out at Rangsit University may widen their activities and get out of control, the National Security Council secretary-general said yesterday.

“Around October 13, protesters may make a move to link with protesters near Government House,” Paradorn Pattanatabutr said.

Paradorn was referring to a rally by the People’s Assembly Reform Thailand group, whose coordinators include the Green Group’s Suriyasai Katasila.

Paradorn said a rally organised by the People’s Army against the Thaksin Regime would not destabilise the government, but the threat could spiral out of control if it teamed up with the protesters at Rangsit.

He said at this juncture there was no evidence of links between various protesting groups, including rubber farmers in Nakhon Si Thammarat. But the government would continue to closely monitor the situation.

He said laws would be enforced in accordance with the intensity of the protests.

At Government House, some 200 to 300 protesters camped out for a second day. Police have shut down roads and deployed about 15 companies of anti-riot police with crowd control gear to keep the peace.

Roads leading to two Government House gates were closed, but traffic to and from the seat of power remains open.

The situation was under control and authorities were negotiating with rally organisers to return to the park, Suporn said.

Protesters should understand that the government will be welcoming a visit by Chinese Premier Li Keqiang on Friday, he said.

He also defended the decision to deploy more police than protesters, saying it was a precaution.

Rally organiser Chai Suwannaphap said any inconvenience to motorists was caused by police and not protesters. Police closed off roads and cut supply routes in order to isolate the protesters, Chai said.

Another organiser, Preecha Iamsuphan, said protesters were rallying under their constitutional right to make peaceful demands.

In the past two years, the government had neglected to address the people’s grievances and opted to amend the charter instead, Preecha said.

Protesters wanted to call attention to their plight as well as imminent issues facing the country, such as the dispute over land near Preah Vihear Temple.

He dismissed allegations the rally took place in accordance with a prophecy that on October 8 the government would be overthrown. He said no political parties were behind the rally although he would welcome support from any politicians who shared their outlook.

PHUKET: People living downstream from Lop Buri’s Pasak Jolasid Dam have been warned to brace for flooding today and tomorrow, as the dam will discharge more than 700 cubic metres of water per second on both days.

The Bangkok Metropolitan Administration (BMA) has said the situation is worrisome, as the province is just 150 kilometres away.

“The level of the Chao Phraya River around Pak Klong Talad in Bangkok is about 1.97 metres above mean sea level,” Adisak Khantee said yesterday in his capacity as chief of the BMA’s Drainage and Sewerage Department.

Flood barriers alongside most of the river’s stretch in Bangkok stand 2.5-3 metres above mean sea level.

As of press time, the level of flood waters in Lop Buri’s Chai Badan district was rising fast because of water discharged from the dam. Adisak said the BMA was also paying close attention to rising water levels in Nakhon Nayok and Prachin Buri.

“We have to watch out for Bangkok’s eastern zones,” he |said.

He said the BMA had asked the Royal Irrigation Department to divide the excess water between the Chao Phraya and Bang Pakong rivers.

“If that happens, we will need to channel some water into the Saen Saeb Canal that runs through the inner zone,” he said.

Banharn Silapa-archa, chief adviser to the agriculture minister, said Bangkok might be flooded for a day or two, though he predicted that the situation for riverside communities in Pathum Thani would be worse.

PHUKET: The incident that spurred calls to take as many old vehicles as possible off Bangkok’s roads took place just a few days ago.

He said the malfunctioning vehicles were more than 10 years old.

“It’s hard to ease traffic congestion in that situation. Tow trucks found it difficult to reach the cars that broke down on the heavily congested road,” Adul said.

The MPB has suggested tax measures be used to discourage Bangkok motorists from using vehicles more than a decade old.

This idea got mixed reactions, including angry outbursts, after it became news.

Willing to consider public opinion, Adul insisted yesterday that the proposal intended to improve traffic flow in the capital, which is infamous for its congested roads.

He explained that it was just an idea, not yet a proposal.

“We will have to hold seminars and discuss the issue with relevant government agencies and the private sector before developing this idea into a proposal for the government to consider,” he said.

Adul said there are about 7 million cars and motorcycles in Bangkok, or 30 to 40 per cent are more than 10 years old.

However, he said the police bureau would start being very strict about vehicles parking in unauthorised zones on Bangkok’s 10 main roads very soon.

“From October 10, we will issue warnings. From October 20, we will strictly have vehicles that have broken rules towed to police stations and their owners will have to pay both a fine and the towing fee.”

PHUKET: Confirming that the Education Ministry would continue its “One Tablet per Child” project next year, Minister Chaturon Chaisang yesterday denied that the 30 per cent of computer tablets rep