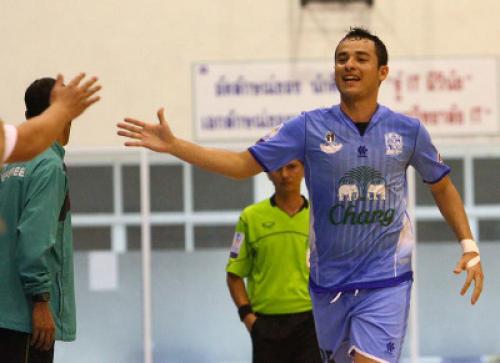 Andaman Pearl’s assistant coach, Mr Patt Srivijit, told the Phuket Gazette that confidence within the team was high before this game, after two successive wins against Prachin Futsul Club and Samut Songkhram respectively.

Jackson Santos put Phuket ahead after the first minute and the Andaman Pearl looked like they might go on to record their third straight win, but the Killer Bees had other ideas. Issawara Chansomkoi equalized in the 13th minute to ensure the first half finished level.

Nonthaburi FC started the second half stronger and took the lead through Pudit Tosongkroh in the 28th minute. Issawara Chansomkoi sealed the victory for the Killer Bees in the 35th minute.

Mr Srivijit expects Phuket United to return to their home stadium at Saphan Hin for the December 26 game against Samut Sakhon.“After the Phuket City Municipality banned us from using the futsal stadium at Saphan Hin, we will be buying polypropylene copolymer (PP) futsal flooring to install on the parquet flooring in preparation for our next match on December 26.”

Phuket United are currently ninth in the league after seven games.

Other TFPL results from Wednesday: