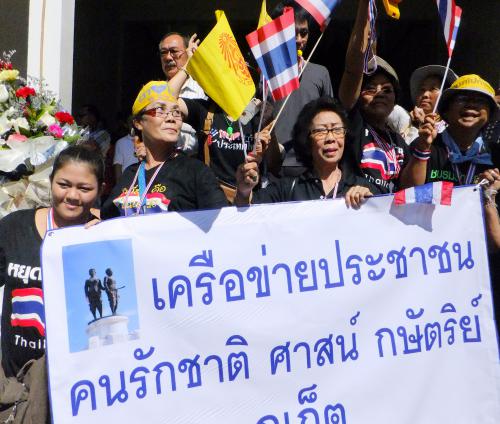 PHUKET: Protesters have vowed to keep pressure on the Phuket provincial government until results of the anti-government rallies are seen in Bangkok.

“The protests in front of Provincial Hall will continue until the big protest taking Bangkok by storm sees results,” protest co-ordinator Amnuay Kumban told the Phuket Gazette this morning.

“The protests have gone too far to start backing down. Right now we need to show that we all love HM King Bhumibol Adulyadej. We need to show that we want to protect our country, our religion, and His Majesty the King. These are the three most important things that we have loved since we were young,” Mr Amnuay said.

“It is up to officers if they will return to work on Monday or not. Either way, we will continue or protests until we get an order from the Bangkok stage saying otherwise,” Mr Amnuay said.

The provincial protests are being co-ordinated by former Thai deputy prime minister Suthep Thaugsuban, who resigned from the Democrat Party to lead the protests in Bangkok, Mr Amnuay explained.

“We will be updated day by day on what to do, as we have opened a live TV channel telling us what is happening in Bangkok,” Amnuay said.