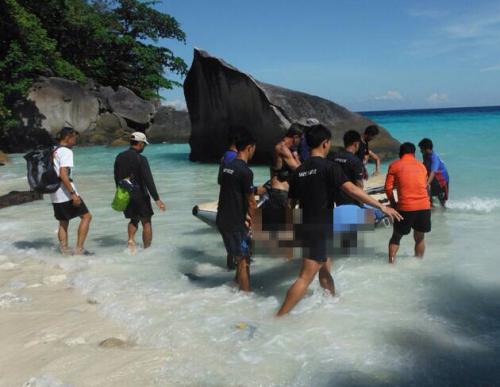 PHUKET: A 78-year-old American snorkeler died from a heart attack in the Similan Island National Park on Tuesday, a doctor at Thai Muang Hospital confirmed to the Phuket Gazette yesterday.

Officers of the Royal Thai Navy, keeping any eye on tourists in the water from the beach, did not spot William Aloyuisus McCleary’s motionless body at first, as it was out of sight behind a boulder, Royal Thai Navy Commander Sombat Saengchaiyaphum explained.

“An officer on a patrol rib spotted him and alerted those on the beach,” Lt Cdr Sombat said.

Officers recovered the body and began to administer cardiopulmonary resuscitation (CPR), he explained.

“About 30 minutes later, we were able to locate and contact the dive company the man had booked his trip with,” Lt Cdr Sombat said.

However, a statement issued by the dive company, Sea Dragon Dive Center, presented a very different account of events.

“Shortly after entering the sea he [Mr McCleary] was spotted lying motionless in the water by his snorkeling guide, who immediately rescued him and took him to the beach, where resuscitation was attempted for 15 minutes, after which he was pronounced dead by the National Park doctor at the scene,” a dive company spokesperson wrote in a statement to the Gazette.

Mr McClearly was part of a six-person group on the dive boat, which included his daughter and his son-in-law, who were visiting from the United States. His wife had not joined them on the trip, opting to stay at the hotel, said the spokesperson.

Family members and a Sea Dragon Dive Center staffer boarded a Similan National Park speedboat and accompanied Mr McCleary’s body back to shore. They were met at the jetty by an ambulance and a minibus, which transferred them to the Thai Muang Police Station and the Thai Muang Hospital.

“The family were then accompanied to their hotel in Phuket, where we offered translation services and any other assistance the family required, until formalities with the local police were concluded and we were unable to assist the family any further in their tragic loss,” the spokesperson said in the statement. “We are thankful to the Royal Thai Navy and national park officials for their quick and efficient assistance.”

Anti-Yingluck protesters in Phuket pledge to not back down