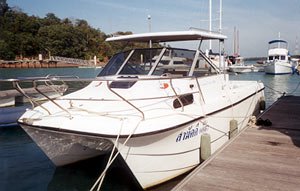 PHUKET: The Phuket Marine Police today seized another yacht on charges that it was registered with the Harbor Master’s office using forged documents that purported to show the boat was made in Thailand. The yacht is the Samakki, a 40-feet fiberglass motor catamaran equipped with twin 200hp engines. The boat, which police say belongs to Thrinuch Kingkaew, who now lives in Bangkok, was taken from the Yacht Haven Marina to be impounded at the Rattanachai Boatyard in Koh Sirey. Announcing the seizure, Pol Maj Prasert Srikhunnarat of the Phuket Marine Police also revealed that there are two groups of Thais involved in smuggling boats into the country, one in Phang Nga and the other in Phuket. Warrants have been issued for the arrests of the Phang-nga group, which consists of five or six members. He added that foreigners often did not know better and thought that the Thais offering to provide papers for their boats were doing so in accordance with the law. He also announced that some government officials are involved. The National Counter Corruption Commission (NCCC) has been notified, he said, and is investigating these officers. He declined to say which government offices the corrupt officials work at.