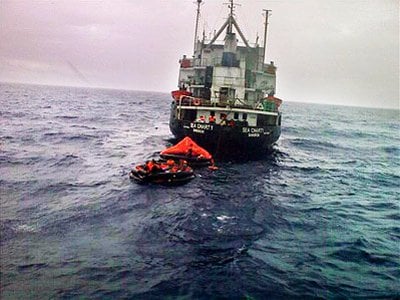 PHUKET: A Thai bulk-carrier ship transporting millions of baht worth of teak from Burma sank in the Andaman Sea just off Phang Nga province on Sunday.

All crew on board the Chart 1 managed to escape on inflatable rafts.

Vice Admiral Narong Tesvisarn, Commander of The Third Naval Area Command in Phang Nga, received a distress call from the crew of Chart 1 just after 7am on August 23.

The distress call said the crew were in need of urgent rescue from their sinking ship.

Chart 1 was in the process of transporting 1,200 teak logs in its 3,200-tonne hold from Burma to its final destination in Vietnam.

The old ship was supposed to take a well-known nautical route from Burma, heading across the Andaman Sea, down through the Straits of Malacca and then on to Vietnam.

However, the bulk-carrier encountered problems not far from Thailand’s coast, where rough seas and severe weather battered the ship, causing multiple leaks in its hull.

Water also leaked into the engine room and began to sink the vessel.

Fearing the ship would sink, the captain alerted the navy, who arrived on the scene within the hour.

By 9.30am, all crew members were safely transported via life rafts from their stricken vessel onto the Thai Navy rescue boat.

The crew comprised seven Thai nationals, including the captain, four Indonesians, and five Burmese, who looked weary and soaked as they watched their vessel sink from the safety of the navy boat.

All crew members were taken to Phang Nga Naval Hospital, most suffering from mild shock and early signs of hypothermia.

On the morning of August 23, the Southern Meteorological Center issued a weather warning for Ranong, Phang Nga, Phuket, Trang and Satun as they were expecting 35 kph winds and two-meter waves.

Chart 1 may not have received the weather report.

Following the incident, the Third Naval Area Command marked the site where the boat sank and navy divers visited the site yesterday.

Vice Admiral Narong said recovery of the vessel would have to wait for confirmation of an insurance payout for salvaging the ship.

“We are worried about the environmental implications of the sunken ship and the prospect of oil and cargo being released from it, causing problems for the environment,” he said.

Mermaid baby given less than a month to live