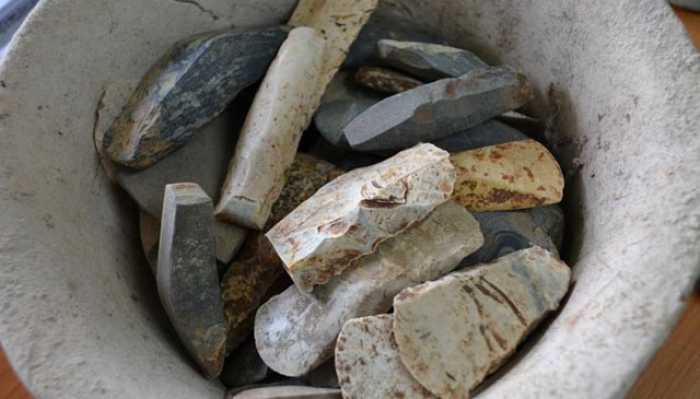 PHUKET: More than 200 ancient artifacts were discovered by chance, scattered on the floor of a cave in Krabi province, across Phang Nga Bay from Phuket, on Saturday.

They were handed over to the Pru Din Na Tambon Administration Organization (OrBorTor) in Khlong Thom for further investigation.

“There are many different ceramic pieces and some ancient stoneware with cutting edges, including a two to five-inch-long stone hatchet.” said Lerthai Jullangkol, chief administrator of Pru Din Na OrBorTor.

“We believe the pieces could date back to 1,500BC,” he said, adding that only two years ago pieces of pottery and some ancient animal bones were found in Krabi (story here).

“These artifacts are proof that there were communities of people living in this area and that they already had the skills to create tools and weapons for hunting.”

As recently as August this year, ancient human bones were unearthed along with clay pots believed to be up to 5,000 years old in the Khao Na Wang Mi area, north of Krabi Town (story here).

The 15th regional office of the Fine Arts Department will arrive at the local OrBorTor tomorrow to clean the relics and register them as pieces of historical importance.

“We hope these pieces will lead to more finds and reveal more information about the lives of people in this ancient community,” said Mr Lerthai.

“It would be another learning place for local students and other people wanting to know about this region’s ancient history,” he said.