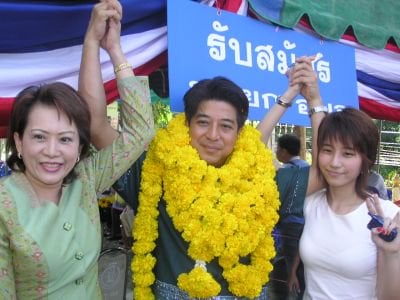 PHUKET TOWN: Two of the three declared candidates for the key post of President in next month’s Phuket Provincial Administration Organization (OrBorJor) elections registered today, along with many candidates for OrBorJor seats. Anchalee Vanich-Thepabutr, who resigned recently as a party-list (non-elected) Democrat MP, won a lucky draw for the No. 1 spot on the ballot, provided her paperwork proves to be in order. Wisut Santikun, of the OrBorJor Gao Mai Khonbaanrao (“New Step Our People”) party, arrived at the OrBorJor building at the same time as K. Anchalee but lost out in the lucky draw. Samroeng Chaisorn, who has announced his candidacy on behalf of the government-backed OrBorJor Gao Mai TRT (“New Step TRT”) party, was oddly not present at the draw, but has until Friday to register for the March 14 elections. The poll will be a test of the TRT’s capacity to carry its national election success to grassroots local government, especially in Phuket where the Democrat Party has traditionally held sway at parliamentary level. Phuket Town District Chief Veerawat Chanpen, who has been appointed to head a five-man provincial election oversight committee, told the Gazette that many candidates had come to register the morning, accompanied by supporters. K. Wisut, who has no national party behind him, said, “I’m confident that I can work for the public. Our policies are really for local people. “National and local governments are different.” People would not get the benefit of having new people and ideas if elected leaders held their positions for a long time, he said. “The members in our team are from a broad spectrum of society but we share the objective of not allowing any national party to take control of local politics. “We are completely independent from national politics but we can cooperate with others to achieve the best result locally,” he added. K. Anchalee said that she will meet local people before the polls and let them know her team’s policies. “Definitely, the Democrat Party supports me,” she said. “Other Democrat members will come to help me campaign, too. “People will look at the experience of the candidates. How their taxes are spent and the way the area is developed long-term will be the factors in how they decide to vote. “I’m still confident that people won’t abandon me because I have never left them.” A total of 218,595 people on the island are entitled to vote. The island is split into 24 election areas, with voters choosing a candidate for president and another to represent their election area. Those elected will hold office for four years.