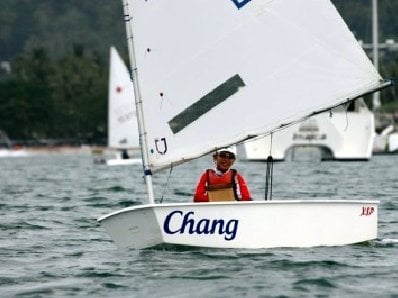 PHUKET: Sailing sensation Anapat Ngarmdee, 10, proved to be one of the stars of the opening weekend of the King’s Cup Regatta by clinching first place in the inaugural Phuket King’s Cup Dinghy Series.

The four-series event, featuring a total of 20 races, finished off Kata Beach yesterday.

Anapat finished in the top spot, heading a field of 19 Optimist-class sailors.

Dedicating his victory to HM King Bhumibol Adulyadej, whose 83rd birthday was celebrated nationwide yesterday, Anapat said he hoped to one day become a professional sailor.

“I am very happy to have won. It is very special for me because today is the birthday of HM The King and I would like to dedicate my victory to him.

“My dream is to represent Thailand. One day I would like to sail in the King’s Cup itself,” said Anapat.

Another overall winner yesterday was Chat Dawruang in the Laser Class. Chat finished in front of six other Laser competitors to land the title.

Both Anapat and Chat will receive trophies from the ML Usni Pramoj, Personal Representative of HM The King, at the Royal Awards at Kata Beach Resort & Spa next Saturday.

In other action, Piriyaporn Kangla won the PKCR Dinghy Race, which gave Optimist sailors who had not raced in the Phuket King’s Cup Dinghy Series a chance to compete.

The Dinghy Series has proved popular, with youngsters from all over the region traveling to Phuket to take part.

“We would like to see more Thai people sailing in the future. We hope that some of these children one day will go on to sail in the King’s Cup.

“The intention of the committee is to use the series to develop the sport of sailing in Thailand. The King’s Cup attracts sailors from all over the world, but few from Thailand. We need more sailors from Thailand to be more competitive in the future,” he said.