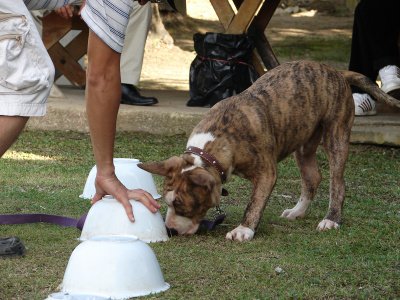 The two candidates, Bebe and Boo Boo, are both four months old. Bebe is a four-kilogram female beagle, while Boo Boo is a male pit bull currently weighing in at seven kilos.

The project is the idea of Phuket Muang District Chief Supachai Pochanukul, who in May sent two other puppies, Nin and Chao Kuay, to PIDS for training.

Mr Supachai hopes Bebe and Boo Boo will do better on the course than their predecessors, who flunked out after two months of training.

PIDS’s owner Wichai Chidchio told the Gazette only a very small percentage of dogs are naturally cut out for drug detection work.

“Bebe and Boo Boo have been undergoing basic obedience for two months. Two weeks ago we decided they had the right temperament for the work and also began training in drug detection.

“The next step will be to take them to public places, abandoned homes and other types of sites where they might conduct actual drug searches,” he said.

“These dogs work better than any drug-detection equipment. Suspects sweat when drug dogs approach because they know they cannot hide the scent or bribe their way out of the situation.

“Drug dogs have a working life of up to eight years. They require little upkeep, just good meals. With a little comfort and affection thrown in, they will fight flat out for you,” he said.

The pair are doing very well should be ready for active duty this January, he said.

District Chief Supachai said he will ask two members of the Phuket Volunteer Security Force to be the dogs handlers, with Mr Wichai assisting them from time to time.

After that they will be available for use by any security unit that requires their services, he said.

As for Chao Kuay and Nin, the former has been adopted by a foreigner and Nin is still living happily at PIDS and is available for adoption, Mr Wichai said.