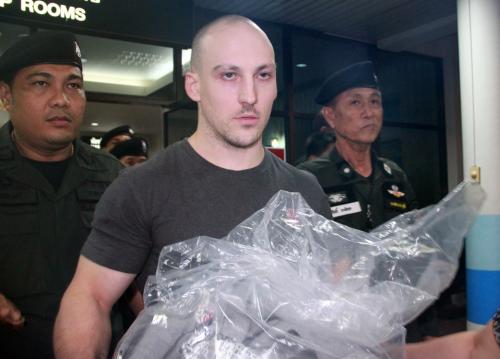 PHUKET: Lee Aldhouse, the British kickboxer extradited from the UK to face murder charges in Phuket, today entered a plea of guilty to murdering former US Marine Dashawn Longfellow in Rawai three years ago.

The plea was entered after Judge Montri Saroj, speaking via a court translator, reminded Aldhouse that a guilty plea would likely “help” commute a possible death sentence.

“The highest penalty for this charge is death. If you accept the charge before the witness testimony, your confession can help commute the death penalty,” Judge Montri said.

The court watched for 15 minutes as Aldhouse consulted with his lawyer, Public Prosecutor Tawan Sukyiran, and his translator before prosecutor Tawan turned to the judge and said, “Mr Aldhouse enters a plea of guilty.”

Judge Montri asked to confirm with Aldhouse that the guilty plea was accurate, to which Aldhouse silently nodded.

Despite Aldhouse admitting to the crime, the trial will continue, Judge Monrti explained to the court.

“Even though the suspect has pleaded guilty, we will continue with the witness testimony to be fair to both parties,” he said.

Court was adjourned and the next trial date for hearing witness testimonies was scheduled for Monday, September 2.

Aldhouse, also known by his kickboxing nickname “The Pitbull”, fled Thailand on August 17, 2010, three days after the slaying of Mr Longfellow.

Accompanied by his girlfriend, he hired a taxi to take them to Koh Samui, but along the way decided to take a bus to Bangkok instead. They then made their way to the Klong Yai checkpoint at the Cambodian border.

Aldhouse was able to depart the country and enter Cambodia at the remote checkpoint, which at the time had no online connection with Thailand’s Immigration database.

Immigration Police only realized Aldhouse had slipped out of the country six hours after the fact.

The girlfriend, who may yet testify, returned to Bangkok by bus and was later picked up for questioning by police. She confessed to her role in aiding Aldhouse’s escape and told investigators of his plan to return to England.

However, British sources familiar with the case told the Phuket Gazette that Aldhouse had fled the UK years before, after serving two years in a Birmingham jail for his part in an armed robbery. He served two years of a five-year sentence for illegal gun possession, the source said.

He was arrested by British authorities upon arrival at Heathrow Airport, London.

Aldhouse is the first person to be extradited from the UK to Thailand since a treaty was signed between the countries more than 100 years ago.

Before today, Aldhouse had long maintained that he stabbed 23-year-old Longfellow, but did not have the premeditated intention of murder.