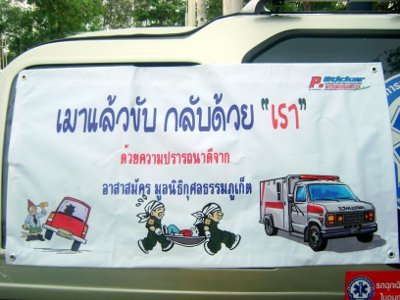 PHUKET: After New Year’s Day claimed the lives of three Phuket motorists, carnage during Day 5 of the “Seven Days of Danger” holiday road-safety campaign was relatively light, with no fatalities and just six injuries reported.

According to figures provided by the Department of Disaster Prevention and Mitigation Phuket Office (DDPM-Phuket), none of the six accidents reported yesterday were attributed to drunk driving.

All were listed as caused by poor visibility, poor road conditions, unroadworthy vehicles – or a combination thereof. All of the victims were Thai, four of them female.

The figures raise the Phuket road toll over the five days to six dead and 61 seriously injured in 58 recorded road accidents. Of these, 87.5% involved motorbikes and 14.1% were attributed to drunk driving.

The fatality figures have already surpassed the “target” of four deaths, a target set before the campaign, but officials likely see yesterday’s low numbers as a good sign that the totals will be lower than the 2009-2010 campaign, when eight people were killed and 92 injured on Phuket roads.

The national road toll over the first four days of the campaign tallied 241 lives lost and 2,382 people injured in 2,167 road accidents, the Road Safety Center in Bangkok announced yesterday.

Mr Witthaya said drunk driving was the main reported cause of accidents, followed by speeding.