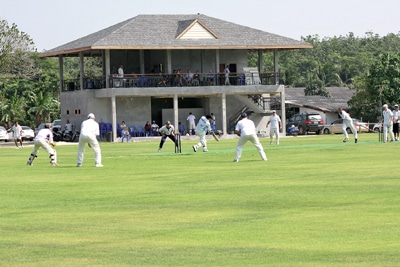 PHUKET: Dates for the official opening of Phuket’s first dedicated cricket facility, the Alan Cooke Ground (ACG), have been announced with a two-day event scheduled for January 28 and 29, 2012.

The ACG has already hosted a number of international touring teams in celebration of the ground’s establishment, including the prestigious Singapore Cricket Club who played in Phuket at the beginning of November and more recently the Delhi Viceroys who took on a Phuket Cricket Group (PCG) selection at the start of December.

Domestic competition has already seen dramatic improvements, both in playing standards and interest in the sport, which can be directly attributed to the development of the ACG which in turn owes a debt of gratitude to the commendable efforts of determined individuals who have given freely of their time and expertise.

As the Island Furniture League leans into 2012 after six highly competitive matches, and after the PCG has expertly organized foundation courses for scorers and umpires giving the players much needed direction and authority – a youth development program continues to promote cricket throughout Phuket.

It is therefore highly appropriate that this jewel of Thailand’s sports development is given deserved attention from international and national authorities in respect of the achievements of both the ACG and PCG.

In recognition of this success, several influential members of the Asian Cricket Council will attend the ACG opening in January.

The Cricket Association of Thailand (CAT) will be represented by its president, Mr Ravi Sehgal, Mr Acharin Suthisawad and Mr Mohideen Kader.

Mr Patrick Cotter will represent the PCG while Mr Alan Cooke MBE will officiate at the proceedings on behalf of the ACG.

“The opening of the ACG will bring new impetus to the Thai youth cricket and rugby development programs, and whilst the ground is completed it will take time, effort, and new funding to bring the facility to its full potential,” Mr Cooke told the Phuket Gazette

The event’s activities on Saturday will begin at 9:30am with guests treated to a 15 over exhibition match by the Youth Development Squad, which will be followed by a PCG senior selection T20 match.

On Sunday, VIPs and guests will watch a Youth nets training session which will be followed by a Lomas rugby match, intending to show the diversity and direction of the ACG.

Pre-function speeches will then be offered by the attending dignitaries before the eagerly anticipated clash between an ACC selection and a CAT selection will excite the crowds.

The Phuket Gazette is the official Phuket media partner of the ACG.