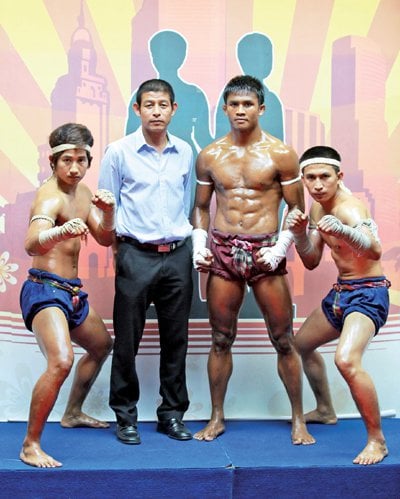 They performed ritual dancing to pay respects to the Muay Thai guardian (Wai Kru) which was followed by an exhibition of 11 major fighting techniques (Mae Mai Muay Thai).

On conclusion of the performance fans were allowed to take photos with the trio.

Alex Troshin, from Russia, said “I have been his [Buakaw] fan for two years now. I’m impressed with his passion for Muay Thai. He’s trained all of his life to become the best. I have been here two weeks for a Muay Thai training session on Phuket. This is the first time I’ve seen him, he’s very impressive.”

Petr Konstantinovich, also from Russia, said “I am on a two-month Muay Thai training session in Pattaya. I have followed Buakaw for a while. As soon as I knew he would perform in Phuket, I had to come specially to see him for one day. He is the number one Muay Thai boxer. Tomorrow I will go back to Pattaya and after I finish training next month, I will come to train here in Phuket.”

Buakaw Por Pramuk was delighted with the turnout and offered words of encouragement to his fans.

“This is my third time to show in Phuket. I’m very happy to see a lot of foreigners interested in Muay Thai and happy to show them the true Muay Thai techniques. For those in training, keep practicing and study each technique as much as you can and I hope you all succeed. I promise to come back to Phuket again.”