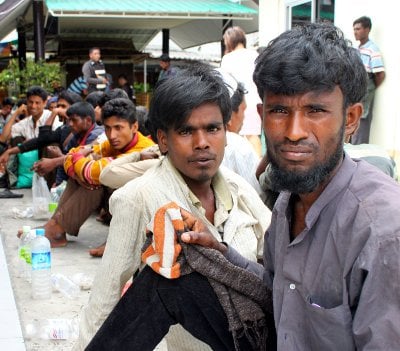 PHUKET: The Commissioner of the Thai Immigration Bureau announced yesterday that immigration officials from Australia will assist Thai officials in their handling of ethnic Rohingya refugees who enter Thai territorial waters illegally.

“They have a serious problem with Rohingya and Sri Lankans illegally entering their country,” Lt Gen Wiboon Bangphamai explained to the meeting of ASEAN immigration chiefs held at the Hilton Phuket Acadia Resort and Spa.

“We have the same problem. Once Rohingya arrive, we have to provide them basic assistance including food, water, propane and some money. We waste a lot of money every year on this issue alone…We usually take them to Songkhla, from which they are allowed to continue on their way to their preferred destination,” he added.

Gen Wiboon explained that Rohingya and Sri Lankans entering Thai waters were usually bound for Australia or New Zealand, which have signed an agreement with the United Nations to allow such arrivals to apply for citizenship.

“If they can make it to those countries, the authorities there have to take care of these people. Thailand is used as a transit route to the Rohingya’s preferred destinations. We would like to stop that,” he said.

Gen Wiboon delivered the news at the combined 16th ASEAN Directors-General of Immigration Departments and Head of Consular Affairs Divisions of the Ministries of the Foreign Affairs (16th DGICM) and the 8th ASEAN Immigration Intelligent Forum (8th AIIF) conference at the Hilton Phuket.

The five-day ASEAN conference, which began on Monday, is scheduled to conclude tomorrow.