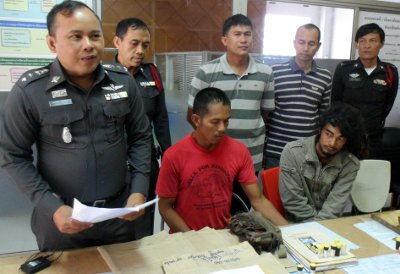 PHUKET: Police in Phuket yesterday arrested a heroin dealer from Narathiwat, in Thailand’s troubled Deep South, seizing more than 80 grams of the drug as well as a stash of dried marijuana from one of his agents.

The arrests followed an investigation by undercover police who caught Mr Teerayut in the act of chopping up some marijuana at Lepang Beach, immediately north of Cherng Talay, at 2am yesterday.

A search of his rented flat nearby uncovered 22.1 grams of heroin, 200 grams of dried marijuana and drug-taking paraphernalia. Police estimated the value of the recovered powder at 50,000 baht.

Under questioning at Cherng Talay Police Station, Mr Teerayut identified his supplier as Mr Wissanu, residing at a home on Soi Pasak 5 in Cherng Talay.

Police raided the home, where they found 12 vials of heroin weighing a total of 60 grams stashed in a shoulder bag hanging in the kitchen. Police estimated the value of the heroin at 120,000 baht.

Under questioning, Mr Wissanu confessed to having sold drugs in the Thalang area “for a long time”.

He originally rented a house in Baan Don, but then moved to his current home in the Pasak area in order to avoid arrest after he began to fear that Cherng Talay Police had been informed of his activities, police quoted him as saying.

Mr Wissanu told police that he sourced the heroin from a “big supplier” in Tak Bai, who sent the drugs to Phuket stashed inside reams of documents that were sealed in addressed manila envelopes. These were then transported on air-conditioned buses plying the Su-ngai Kolok to Phuket route.

His customers would pay him through electronic transactions made into a bank account opened under his mother’s name, he said.

Both men were charged with possession of a Category 1 drug with intent to sell.

ASEAN in Phuket: Australians to assist handling of Rohingya landings in Thailand

Phuket Sports: US Open – Federer out, Murray through