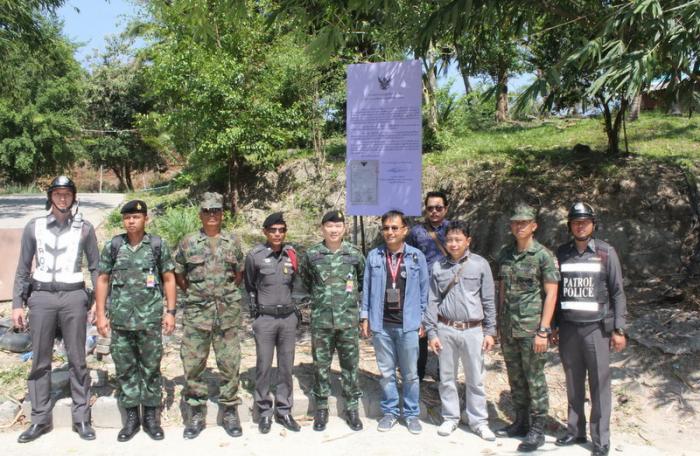 PHUKET: The Agricultural Land Reform Office (ALRO) is engaged in a legal feud with the occupant of 22 rai of land near Paradise Beach.

A land ownership dispute between the ALRO and defendant Sompong Sakulthap was decided in favor of the former by a Phuket court last month. ALRO officers and other officials visited the property yesterday morning in order to place a notice of eviction.

Mr Sompong’s lawyer claims that his client has a Sor Kor 1 for the land and that his family has been staying there for three generations. Additionally, Mr Sompong claims that he is in the process of obtaining a chanote for it.

“The land in question is located on a hill between Tri Trang and Paradise beaches. It is part of a larger piece of 69 rai previously owned by Banlue Tantiwit many years ago. About ten years ago, it was seized by ALRO and Mr Banlue was ordered to leave,” said Suthawat Naksawat of ALRO.

“At that time, we asked anyone who owned nearby land to submit a notice of consideration to ALRO,” Mr Suthawat added.

Mr Sompong reported he owned 22 rai of land, saying it was not part of the 69 rai claimed by Mr Banlue.

However, the ALRO said that was not the case, and the property fell into dispute again. After a long legal battle, the court last year ruled in their favor. Mr Sompong appealed, but lost again.

Despite losing the initial case as well as the appeal, Mr Sompong’s lawyer said they they would enter into further ‘negotiations’ with the ALRO.

Cruise ships in Phuket inject over 30 million baht a day