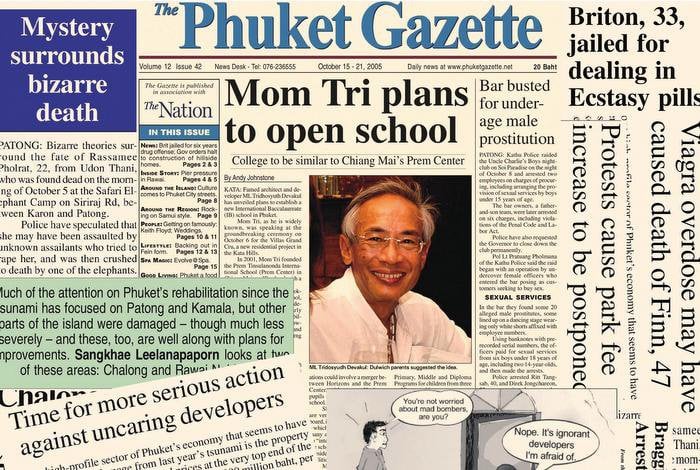 PHUKET: Mom Luang Tridhosyuth Devakul, probably better known on the island simply as ‘Mom Tri’, scored page one a decade ago with his dream of developing a new International Baccalaureate (IB) school for the island.

With a master’s degree in architecture from Harvard – the real Harvard – Mom Tri was an early visionary leader, recognizing Phuket’s potential and was instrumental in the development of the Phuket International Airport, as well as a number of other properties on the island, such as the Royal Phuket Yacht Club, which in 1986 was the island’s first luxury hotel and is now reopened as ‘The Nai Harn’.

The vision for the IB school was beautiful and was to include an ‘integrated community’ with the school at its heart. There was also to be a residential development, sports facilities and a library.

Unfortunately, the plan neither bloomed nor bore fruit. Instead, it has merely become a foot note in the development of educational institutes on the island.

Though the Phuket Gazette was keeping it classy and staying in-tune with the community with the lead in the October 15-21 2005 issue, there was plenty of titillating sensationalism with the sidebar headline: Bar busted for under-age male prostitution.

The gist of the story should be pretty well understood from the headline: 20 alleged male prostitutes, some under the age of 15, working at a bar on Soi Paradise, were rounded up in a sting operation.

“Using banknotes with pre-recorded serial numbers, the officers paid for sexual services from six boys under 18 years of age, including two 14 year olds, and then made the arrests… The fact that the boys willingly engaged in prostitution has little bearing on the charges,” the Gazette reported.

Such an effective effort by police makes the recent months of officers ending up empty handed after raiding nightlife venues in hopes of finding illegal workers look quaint. But maybe, just maybe, officers ten years ago did such a good job that there aren’t any illegals left operating on the island.

Well, of course, there will always be just a few that can’t afford to pay for tea and end up surfacing here and there, such as the man running sex shows on Soi Bangla who was outed by pop star Rihanna via Twitter in 2013.

This issue also detailed the budget for the Rawai Pier, which has become a staple landmark for the southern tip of the island, and even has Stephen Fein, who still wields the pen for the Gazette‘s editorials, discussing his battle with lower-back pain. However, the real kicker is the Time Machine (October 15, 2000): Protests cause park fee increase to be postponed.

The implementation of the dramatic increase in park fees, which were to only apply to foreigners, was pushed back from September 13 to October 1, 2001. The fee for a foreign adult was to jump from 10 baht to 200 baht.

Twenty years later, almost to the day, a foreign-faced, American citizen who was born and raised in Phuket – and very much Thai at heart – worked up a social media frenzy about double-pricing at Emerald Pool, Krabi. He refused to pay his 200 baht.

To read the entire October 15-21, 2005 issue, check out the Phuket Gazette archives online (here) – or, for those who have been around awhile, start cleaning out the attic.