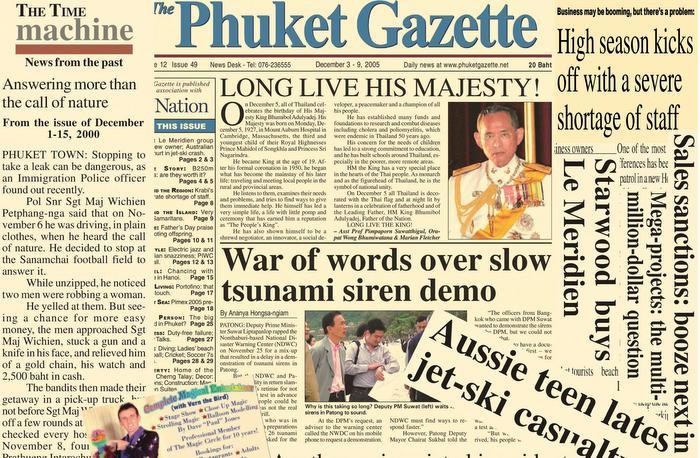 PHUKET: Without a doubt, the Phuket Gazette sounds like a broken record from time to time, as the publication continues to push important issues into the headlines. One such monotonous tune – also regularly played by ambassadors and honorary consuls – revolves around the seemingly invincible jet-ski business operators on the island. Almost inexplicably, they were the first allowed back on the beaches after the National Council for Peace and Order (NCPO) began to eradicate a number of deeply seeded issues on the island. Unfortunately, some parasitic plants’ roots simply grow too deep.

The harm caused by allowing unlicenced tourists to rent out the expensive, dangerous watercrafts crashed into the December 3 – 9, 2005 issue of the Gazette when an Australian teenager was critically injured after colliding with a jet-ski operated by his 20-year-old friend. The man’s friend, who told police that he was just ‘horsing around’ when he approached the teen at high speed, was charged with negligence causing grievous bodily harm.

How the police managed to charge the man given the fact that his critically injured 19-year-old friend was expected to be undergoing brain surgery – and was in no shape to file a complaint – is difficult to say. The situation seems especially strange to Phuket news junkies who are aware that more often than not, it seems police on the island require the injured party to file a complaint before taking action; apparently some things do change.

Another common issue that continues to plague local tourism also found its way into the issue with the headline: High season kicks off with a severe shortage of staff.

“Hotels, bars, restaurants and tourism-related businesses are struggling to find competent staff,” Gus Reynolds wrote in the 2005 column ‘Across The Bay’.

Though dumbfoundingly low English-language abilities in Thailand continue to create high-demand for Thais working in the tourism industry, the problem – unlike the jet-ski one – is likely to come to a head with the opening of the Asian Economic Community (AEC) at the end of the year. Though anticipation is soaring like Icarus as hoteliers prepare to bring on board staff from other AEC countries, the sun has yet to burn off the morning haze on exactly what the AEC will mean for Phuket. Will the multitude of jobs set aside for ‘Thais only’ remain, or will this be one of the first barriers dashed by the multinational agreement?

Not so long ago, the hospitality industry made enormous headlines – Reuters, New York Times, You Name It – when Marriott International Inc committed to buying Starwood Hotels & Resorts Worldwide Inc for US$12.2 billion to create the world’s largest hotel chain with top brands including Sheraton, Ritz Carlton and the Autograph Collection. A building block in that collection, in fact, made a debut ten years ago in the Gazette when Starwood announced that it had completed its acquisition of the Le Meridien brand, related franchises and management contracts. Starwood dished out US$225 million to gain control of the 130 hotels and resorts worldwide – including Le Meridien’s two properties in Phuket, one in Khao Lak and one in Koh Samui. Now if we could only find some benevolent broker to buy out the jet-skis and allow the ambassadors to Thailand, honorary consuls and Gazette editors to focus on other issues handicapping Phuket’s growth and success.