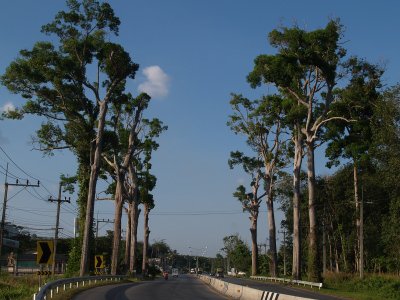 PHUKET: Phuket City Municipality mark Mother’s Day, which in Thailand is on the August 12 birthday of HM Queen Sirikit, with a variety of public activities at Suan Luang Park on August 9.

The activities include the planting of 999 yang na, or “hairy-leafed apitong”, trees.

The Kata-Karon Hotel Business Association, together with Krungthai Bank, the Rotary Club of Tungkha and the Phuket chapter of the volunteer Land Protection Unit of the Royal Thai Army Women’s Reserve Corps, will start proceedings at 9am.

As most Thais consider the number “9” auspicious, the event will also see the release of 9,999 “effective micro-organism” (EM) balls into the park pond.

The balls are to encourage healthy growth of plants that naturally “clean” the water, preventing any unwanted odors.

The planting project falls under an Interior Ministry initiative that aims to have 7.7 million yang na trees planted throughout the country as a tribute to HM The Queen.

The project, which began on August 12 last year, is set to be complete by August 12 this year.

Kata-Karon Hotel Business Association President Somchai Silapont said, “We are planting yang na trees as nursery stock because although they were abundant in the past, today there are no more than 10 growing in Phuket.”

Reaching up to 40 meters when fully grown, the species is known as the “King of Trees” in Southeast Asia, he added.