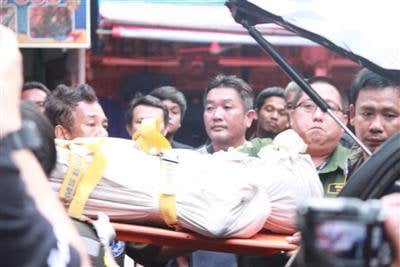 PHUKET: A pre-dawn blaze at the popular Tiger Bar and Discotheque in Phuket has left four people dead and 11 people injured.

Among the injured were four French nationals.
Kathu Police were notified of the blaze at the well-known Patong nightspot at about 4am.

Patong Municipality Fire Department rescuers raced to the scene with eight fire engines. It took them about one hour to extinguish the fire.

The firefighters had to battle the blaze in the darkness, as power had to be cut throughout the municipality for safety reasons.

Kathu Police said that the cause of the fire appears to have been related to an explosion in an electrical transformer.

The identities of the four dead have not yet been released; all were burned beyond recognition.

The most seriously injured person was 30-year-old Frenchman Benjamin Tallanotte, who suffered second-degree burns to 40 per cent of his body. He was among two victims who required admittance to Patong Hospital.

The other victim was 42-year-old Noodaneg Pramangkata, who suffered from dizziness and hyperventilation.

Other French nationals treated and released were identified as:

Also suffering a serious injury was 25-year-old Kanyaporn Kantong, who was at the venue with two friends when they began to smell smoke in one of the two second-storey bars attached to the disco.

Another witness who escaped unharmed told the Gazette she noticed that Mr Talanotte was badly burned and assisted him to safety.

Mr Talanotte was a guest at a hotel on Nanai Road and was concerned that his wife was unaware that he was being treated in Patong Hospital.

Although not on the list of those treated at Patong Hospital, the owner of the nightclub, identified only as “Mr Piya”, also suffered minor injuries, Patong Police said.

The area remains cordoned off as investigators sift through the scene, including the bar complex area underneath the main nightclub.

The Gazette was told that once news of the fire spread through the nightclub, many patrons rushed to the front door. Many people were hurt as they tried to exit via the stairs at the front.

Security guards are now allowing controlled access to let bar owners in to check their properties.

The electrical power supply has now been restored to the wider area.

For further images of this dramatic scene click here.