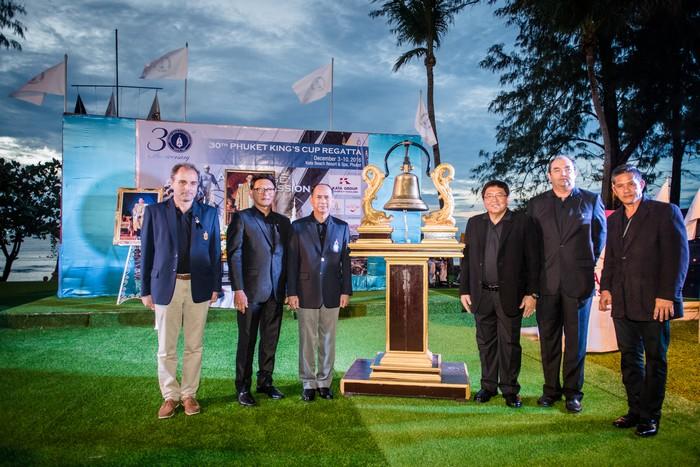 PHUKET: Fair winds were afoot on Sunday for the launch of the 30th annual Phuket King’s Cup Regatta, which this year is under the theme ‘Heritage of Passion’, in memory of the late HM King Bhumibol Adulyadej and in honor of Thailand’s new monarch HM King Maha Vajiralongkorn Bodindradebayavarangkun.

Held at the Kata Beach Resort December 3-10 under the auspices of the Royal Varuna Yacht Club in co-operation with the Royal Thai Navy, the Yacht Racing Association of Thailand, and the Province of Phuket, this year’s regatta boasts more than 200 international boats plus at least 1,000 local and international teams of sailors from more than 30 countries.

The competitive classes this year include Keelboats, Multihulls and International Dinghy Classes.

During Saturday’s opening ceremony, organizers and participants held 89 seconds of silence to mourn the passing of HM the late King.

The president of the regatta’s organizing committee, Kevin Whitcraft, said the regatta is at the pinnacle of international regattas in Asia. “The King’s Cup has helped to position Thailand as one of the world’s premier international yachting destinations, and continues to help the country’s yachting industry grow while contributing to the local economy.”

The regatta is expected to generate more than 300 million baht over the week, said Mr Whitcraft. “As a world-class yachting festival, the regatta has a positive effect on ‘Brand Phuket’ among travellers.”

“The Phuket Dinghy Series has inspired youngsters from many sailing clubs in Southern Thailand to take up sailing since its introduction in 2010,” he said.

Many of last year’s winners are back again to defend their class honors such as: ReRefine, Hurricane, Pine Pacific, Twin Sharks and Pop Eye.

“This year we will see our new wave of young Thai sailors compete in International Dinghy Class; Bam Kamolwan Chanyim and Keerati Bualong, the first Thai Laser sailors who join the Olympics in Rio. We also welcome 39 youth sailors who qualify at the first session to SEA GAMES 2017,” said Mr Witcraft.

The Phuket Gazette has proudly sponsored this prestigious event since 2005.