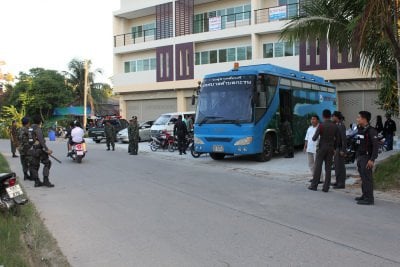 PHUKET: Police and district officials rounded up 27 suspected drug users on Tuesday night at a random checkpoint set up on Soi Nakok in Chalong subdistrict, Phuket.

Suwat Buppapo, chief of the Muang District Security Unit, said that the aim of the checkpoint was to stop and identify drug users “so that they may be given the opportunity to attend a future drug rehabilitation camp”.

Most of those testing positive were teenagers.

Chief Suwat said he wished to make the Nakok area “a drug-free zone”.

“I have received many reports indicating this area has many drug abuse problems. I want to reduce the number of drug users here to zero.”

“This ‘stop-and-check’ operation is part of a national anti-drug campaign,” he added.

As at similar checkpoints that have been set up around the island as part of the initiative, those testing positive for traces of illegal substances are given a choice: attend the drug rehabilitation program or face charges and possible imprisonment.

Drug rehabilitation programs are being run by all Phuket subdistricts and municipalities. A camp run by Koh Kaew subdistrict in May was attended by 67 of the 80 drug users caught at a checkpoint on Thepkrasattri Road.

Phuket Raceweek gets off to a lively start