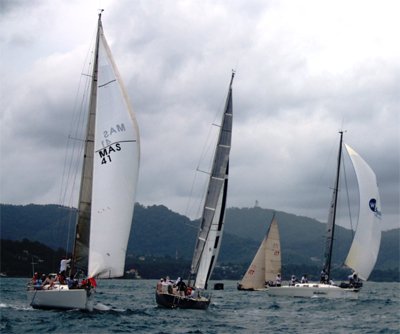 PHUKET: The 2012 Cape Panwa Hotel Phuket Raceweek got off to a lively start last night with the opening party attracting over 500 guests.

With thirty-four boats registered, competing over seven classes and divisions, day one looked looked set for some good competition as predicted winds of 10-12 knots gusting to 15, arrived on cue.

The 13-strong IRC Racing fleet is split into three divisions: IRC Racing I, Sportsboats and IRC Racing II. All three divisions were on the startline together as the Race Officer got the Regatta underway. The all-new Katsu (Ben Copley), an Aquila Reichel Pugh 45 built in China, was the one to watch and they took an early lead off the line in Race 1. Katsu lead upwind and downwind, rounding the leeward mark ahead of Wan Marang (Kevin Whitcraft) in second and Jing Jing (Rick Pointon) in third.

Katsu continued to lead around the course in Race one and secured line honors, only to lose out on handicap to Jing Jing who sailed a solid race. Wan Marang finished in third only 25 seconds behind Katsu on corrected time.

Katsu got off to a poor start in Race two, fearing OCS she ducked back behind the fleet as the rest bunched at the pin-end of the line. On the downwind leg Katsu had made up some ground on the fleet and rounded in second close behind Wan Marang. However, Wan Marang managed to hold off Katsu’s charge to take line honors but lost out on handicap to Jing Jing who took their second bullet of the day.

In the Sportsboats class, the Welbourn 25 Brace Brace Brace (Paul Murphy) led the fleet around the course to take line honors while Surf Patrol (Ray Waldron) and Longitude (Rolf Heemskerk) had a close on-water battle matching each other tack for tack. At the first leeward mark rounding, a poor spinnaker drop by Longitude saw Surf Patrol sneak past and go on to beat Longitude around the course and also on corrected time.

In Race two, Brace Brace Brace made a good start and took an early lead. Surf Patrol and Longitude continued their ‘Battle Royale’ racing within a few boat lengths of each other around the course. Brace Brace Brace stretched their lead and took both line honors and the handicap win making it two from two on the first day.

In IRC Racing II, seven closely-matched boats and a number of regional regatta winners with crews from all over the world lined up at the start. Competition was expected to be tough and the racing was close. Regatta regular Skandia Endeavour of Whitby (Stuart Williamson), took the first win on corrected time from line honors-winner Ruby Tuesday (John Vause). Third place went to Phoenix (Niels Degenkolw), with only four minutes separating the top three on corrected time.

Stuart Williamson and his crew on the Bermudian Sloop Skandia Endeavour of Whitby continued their winning ways in Race two with a win in the second race from Phoenix who switched places with Ruby Tuesday.

IRC Cruising were set on Course 13: south around Bon Island and back around Lon Island to port, and on to the finish. Asia Marine Kinnon, skippered by local sailing stalwart Andy Dowden, got the best start leading the fleet off the line. However, the Oceanis 423 Dreamtime (Rob Azzopardi) soon find their way and moved to the front of the pack to race off and secure line honors and the win on corrected time. The well-known Sparkman & Stephens design Remington (Jim Ellis) placed second ahead of Sail in Asia (Mike Downard) in third.

Five boats lined up for the Firefly One-Design class, including winner of the recent Phuket Multihull Regatta Voodoo (Hans Rahmann). True to form, Voodoo lead off the line with Twin Sharks (John Newnham) close behind. The Frog (Neil Ayre) tacked early with Twin Sharks following and Voodoo covering. As they rounded the leeward mark for the first time, there was a traffic jam as The Frog, Twin Sharks, and Phoenix (IRC Racing II) battled for position on-the-water. Voodoo went on to win the race and set the standard for the rest of the one-design Firefly’s to beat. Moto Inzi (Roger Kingdon) finished second and Twin Sharks third.

After a last place in the first race, Premier Cru (Peter Dyer) got off to the best start in Race 2 for the Firefly One-Design class but lost ground on the course as Voodoo, Moto Inzi and Twin Sharks powered past to finish 1, 2 and 3 respectively.

A highly competitive fleet of six multihulls registered for the Multihull Racing class. The much anticipated newly-launched Stealth 11.8 Cat ‘Hurricane’ (Alan Carwardine) suffered damage on the way to the anchorage the day before and scored a DNS. Sweet Chariot (Henry Kaye) and DaVinci (Mark Pescott) surprised the rest of the class with a dash from behind to lead off the start at the pin-end. However, Miss Saigon (David Liddell) soon made up ground and lead on the approach to the downwind mark. A poor spinnaker drop saw Sweet Chariot round first and go on to claim line honors. DaVinci forced Miss Saigon wide as they approached the finish and the two crossed together. However, on corrected time, DaVinci took the bullet ahead of Charro (Damien Kimball) and Nina (Rob Cullen).

In Race two, Sweet Chariot again got the better start and seasoned skipper Henry Kaye went on to put space between them and the rest of the class. Sailing well, Kaye and his crew secured another line honors but lost out to in-form DaVinci on corrected time, while Niña again finished third.

The four-strong Classic class stretched their legs on a single islands course: around the southern islands of Hae (Coral Island) and Aeo. Classic boat racing is a rare sight in Asia and Classics is a class that has been well supported at the Cape Panwa Hotel Phuket Raceweek since the Regatta’s inception.

The stunning Hans Christian 38T McBob the Boat (Joe Gruba) took line honors today but was beaten on corrected time by Sirius (Simon Morris), who after racing for almost three hours beat the grand dame of the fleet, Seraph (Captain Bao), by only 30 seconds on corrected time.

Winners were presented their trophies at a beachside prize-giving and party at the Cape Panwa Hotel. Races continue tomorrow.

The Phuket Gazette and PGTV are media partners of The 2012 Cape Panwa Hotel Phuket Raceweek.