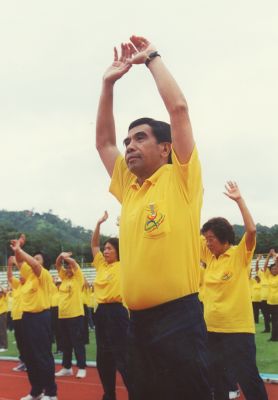 PHUKET TOWN: A sea of yellow shirts filled Surakul Stadium yesterday as 2,000 people in Phuket joined in with the nationwide “Yellow Shirt Power Dancing 2003” event. More than 8.2 million people around the country took part in the fun, aimed at persuading people to exercise for at least 30 minutes every day. The activities began at 2 pm with games and demonstrations from local schools, including the Lukthoong country music dance group from Baan Samkong School. Governor Udomsak Usawarangkura led the mass dance at 5 pm and the crowd danced away for 45 minutes. Sudarat Keyuraphan, Minister for Public Health, who joined Prime Minister Thaksin Shinawatra at the equivalent event in Bangkok, announced that the nationwide aerobics session will be considered by the Guiness Book of World Records for an entry in the “Largest Group Exercise” category.